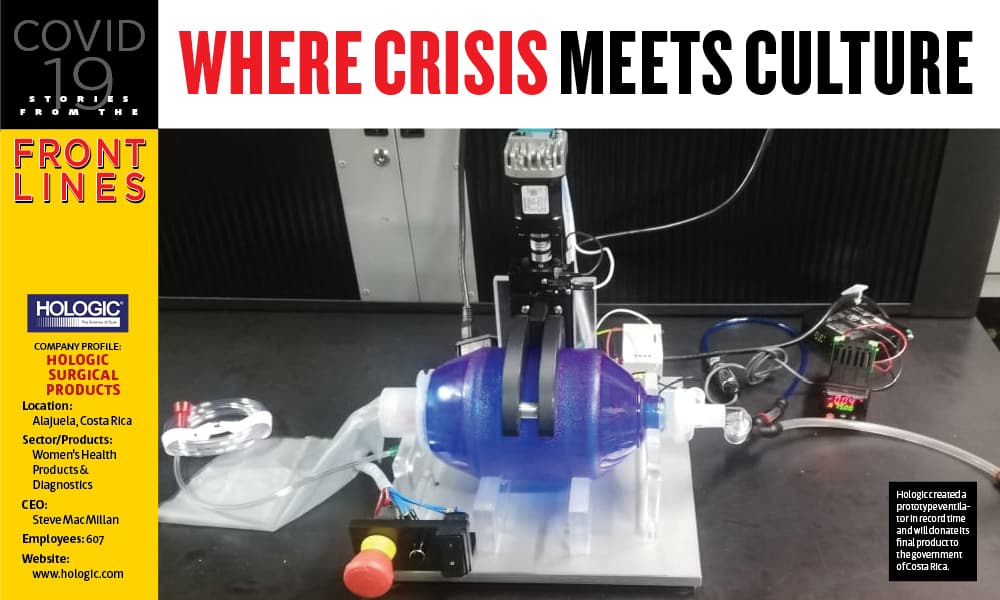 Driven to act in providing masks and ventilators, Hologic relies on mission of operational excellence.

For many manufacturers, the COVID-19 outbreak was a call to action. This was true for Hologic. As a manufacturer of medical technology mainly for women’s health and wellness, Hologic’s guiding principles put the company in a good position to create flexibility in its operations and foster growth and expansion.

The foundation of Hologic’s operational excellence is people. When this pandemic started, employees realized the need to focus on the company’s core principles to solve problems. With this mindset of continuous improvement, the team set out to do what it could to respond to the crisis.
The decision was made to put the company’s technology, resources, and knowledge to its best use: making surgical masks and mechanical ventilators.

Hologic quickly formed work teams and focused on the design and development of a production process for these new products. It was the teams’ engagement, dedication, and desire that made the change possible. Even though there was only a short time to act and the challenges were surmountable, the teams decided to focus on “it might work” instead of “maybe not.”

The Pivot to Make Surgical Masks

In an emergency, time is of the essence. The most practical and innovative ways must be sought to achieve the goal and still offer a high-quality product. In the case of Hologic’s move to manufacturing surgical masks, development stages usually carried out consecutively were done simultaneously instead. The product design was guided with the feedback of many doctors and potential users while in-house equipment was configured and materials were procured. The team also developed documentation, knowledge, and user resources to ensure the product would meet all requirements.A formidable challenge for making these masks was contacting new material and equipment suppliers. Many were experiencing delivery delays or closures, including an ultrasonic equipment maker in Shanghai and a stoll needle supplier in Germany. Those delays meant not being able to prepare equipment as quickly as hoped.

Even though everything was against them, the teams decided to focus on “it might work” instead of “it might not.”

However, technology became a crucial driver in speeding production when it led to significant time savings for implementing a design change that involved joining elastic fiber with fabric. The initial solution was to make seams, but the company found that ultrasonic welding could achieve the same goal in a much shorter time and with fewer resources focused only on this operation. It could be used on existing equipment, and suppliers of the technology could adapt it to Hologic’s workstations. In a month and two weeks, there was a design, as well as its verification process and laboratory studies. A production line was installed with the equipment and knowledge required to turn this idea into a reality.

Today Hologic is making a class I surgical mask that ensures its user protection as well as comfort. The manufacturing process is performed entirely within the company. Its main purpose is to ensure the protection of our people while we continue working on our portfolio of lifesaving and life-enhancing products.

Hologic expects to produce 1,300 units per day by July to be used by its own employees worldwide.

Rapid Prototyping for Developing a Ventilator

Building a ventilator for the first time requires a lot research and investigation because of its need to meet strict government regulations.

Hologic developed its first open loop automatic prototype in April, and after analysis made a number of changes to its design, function, and components. Hologic also used outside expertise for guidance and conducted intensive research on materials, technologies, and the needs of the healthcare community.
The company is creating its second prototype and plans to start production in June. They will be donating all ventilators to the government of Costa Rica.

M4.0 technologies were essential to overcoming challenges for this project like delayed parts deliveries. The teams used 3D printers and CNC machines for parts production, automation for sensors and electrical functions, and robotic testing for motors and 3D prototype product design.

Times of crisis can test even the best organizations, but Hologic’s built-in culture of engagement and drive for excellence helped make this transition possible.  M