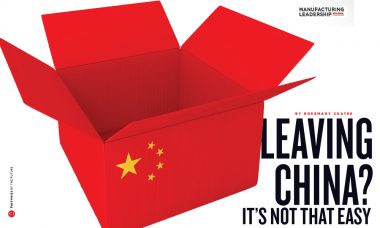 Trade tensions and the global pandemic’s effect on supply chains have compelled manufacturers to rethink their strategies in China. But pulling up stakes in China is far from simple and may not be in a manufacturer’s long-term interest.
By Rosemary Coates

Are you packing up your operations in China and moving to another low-cost country or reshoring back to the U.S.? Many companies are rethinking their global manufacturing strategy in light of the global pandemic and recognizing supply chain vulnerabilities. Reshoring is the hottest topic on executive agendas and in board rooms across the U.S.

But not so fast. There is a lot to consider.

Moving to another low-cost country, nearshoring, or reshoring are real possibilities. Manufacturing in multiple countries is the newest, most popular of global strategies – including manufacturing in the U.S. if you can make the economics work.

The Tax Reform Act of 2017 helped. U.S. manufacturing tax rates are now 21%, while the average tax rate for manufacturers around the world is 24%. This has leveled the playing field for American manufacturers in terms of taxes. It’s also easier and less costly to repatriate funds to the U.S., making money available for capital investment, an intent of the Tax Act. The 301 China penalty tariffs gave a little push to consider manufacturing in America to avoid the now-costly Chinese imports. But the global pandemic made executives acutely aware of their global supply chain risks and vulnerabilities, and provided an opportunity to rethink global manufacturing strategies.

But how easy is it to extract your manufacturing from China or end your relationships with suppliers and contract manufacturers?

Attitudes in China Have Changed

If you are currently doing business with Chinese manufacturers, you have probably noticed some changes over the past couple of years. During the so-called golden years of manufacturing in China (approximately 2000-2015), Americans were welcomed and encouraged to do business in the country. Despite communications barriers and sometimes difficult contract negotiations, it was relatively easy and a sound cost-cutting decision to move operations or sourcing to China. But the more recent anti-China rhetoric coming from Washington and the deteriorating government relationships with China have ignited a parallel change in Chinese attitudes toward Americans. 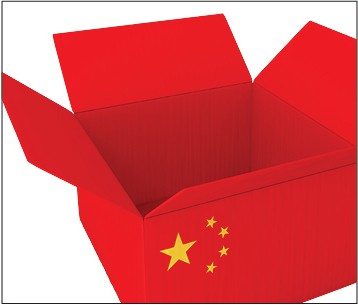 China is likely to be your company’s biggest target market over the next 20 years.

As U.S. politicians have been China-bashing, so too are Chinese politicians outwardly American-bashing, a significant cultural change from the typical Chinese indirect way of communicating. Once the penalty tariffs escalated into a trade war, anti-American sentiment began to take root and grow in China. The Chinese government and the Chinese Communist Party (CCP) began to instruct Chinese manufacturers to focus on other customers and markets besides America. Behind the scenes, it’s been reported that some Chinese manufacturers were instructed to stop doing business with American customers, particularly in high-tech industries. Some American companies were dumbfounded when their Chinese suppliers started to slow-walk the delivery of orders despite plentiful and profitable contracts. Chinese newspapers have recently started publishing negative stories about American customers.

These attitudes further complicate an already difficult process of untangling company supply chains and manufacturing in China. Companies cannot expect to simply pack up shop, lock the doors, turn out the lights, and move back to the U.S. or another country. It’s more complicated than that.

With nearly 350 million people in China’s middle class and growing, China is likely to be your company’s biggest target market over the next 20 years. The growth rates across all of Asia are expected to be as high as 10-12% over the next few years. As the Asian middle class grows, so does its disposable income and the desire for all kinds of products, particularly those with Western brand names. Even though China’s growth has slowed to 6-7%, it is still astounding compared to most developed nations.

To serve these markets, many manufacturers are deciding to leave at least some of their production in Asia. This strategy allows for the avoidance of trade issues that may come in the future and proximity to Asian customers.

A Multitude of Considerations

In China, most workers are hired under employment contracts lasting one to two years. If a company closes its factory in China, the expectation is that all employees will be paid until the end of their contract. This is often a costly surprise to Western companies. Before deciding to leave China, companies should carefully check their responsibilities outlined in their employment contracts. 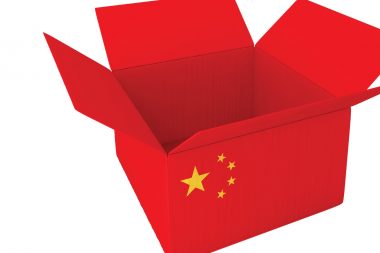 Chinese politicians are now American-bashing, a significant cultural change from the Chinese indirect way of communicating.

If a company does not take steps to identify ownership and sign an agreement to that effect, including serial numbers positively identifying each item, it may never see the tools and molds again. This is because the Chinese believe that they have been given this equipment and it becomes part of the plant’s infrastructure. In addition, the Chinese government may not allow the machines, tooling, and molds to be exported. Your contract, which you thought clearly defined ownership, may not be honored in a Chinese court.

Blueprints and molds that are made in China for your production line, are yet other issues to consider. If a Chinese manufacturer has your blueprints and it outsourced the mold-making to a subcontractor, it’s a sure bet that the manufacturer will continue to produce your goods long after you are gone. The Chinese mold-maker is likely to claim ownership of the mold, even though you paid to have it made. The Chinese company may have registered your trademark and logo in China without your knowledge. You may find your company competing in global markets with counterfeiters and companies that have registered your trademark in China.

When a company leaves China, it also leaves behind its manufacturing intellectual property if the Chinese have been taught confidential production methods. We’ve all heard the horror stories about IP theft, copying, and counterfeiting in China.

Many companies make the mistake of simply comparing labor costs when determining their reshoring pathways.

In addition to paying out employment contracts, there may be other financial regulations that must be considered. China’s Commerce Department has issued guidelines for withdrawal from China by foreign investors. Chinese law requires that foreign investors inform creditors of the closing, settle all outstanding taxes, pay all pending debts, liquidate property, and de-register the business. In addition, companies may be required to pay closure taxes. All this takes time and money, and often comes as a surprise to Western companies in the process of reshoring.

Obtaining a permit to leave may be yet another hurdle. Depending on your industry, the Chinese government may not want you to leave the country. High-tech companies, in particular, may be subject to extended exit permit times. Anything that would be considered a strategic industry or strategic technology is likely to experience delays in the permitting process.

There is a lot to consider when developing a new global manufacturing strategy. With the election of Joe Biden and Kamala Harris, policy changes will affect global relationships. Catherine Tai has been selected as the next U.S. Trade Representative and with her significant background in China relations and negotiations, the U.S. relationship with China is likely to improve.

Biden has stated that there will be incentives for companies that reshore production and penalties for those that leave the U.S. He’s promised to enhance and enforce the “Buy America” regulations for government procurement, support innovation initiatives, and upgrade American infrastructure.So many companies make the mistake of simply comparing labor costs when determining their reshoring pathway. But there is so much more to a reshoring decision, especially within the context of a global pandemic and the potential for new federal policy. Microeconomics of each individual company will drive the final decision to reshore or not.   M