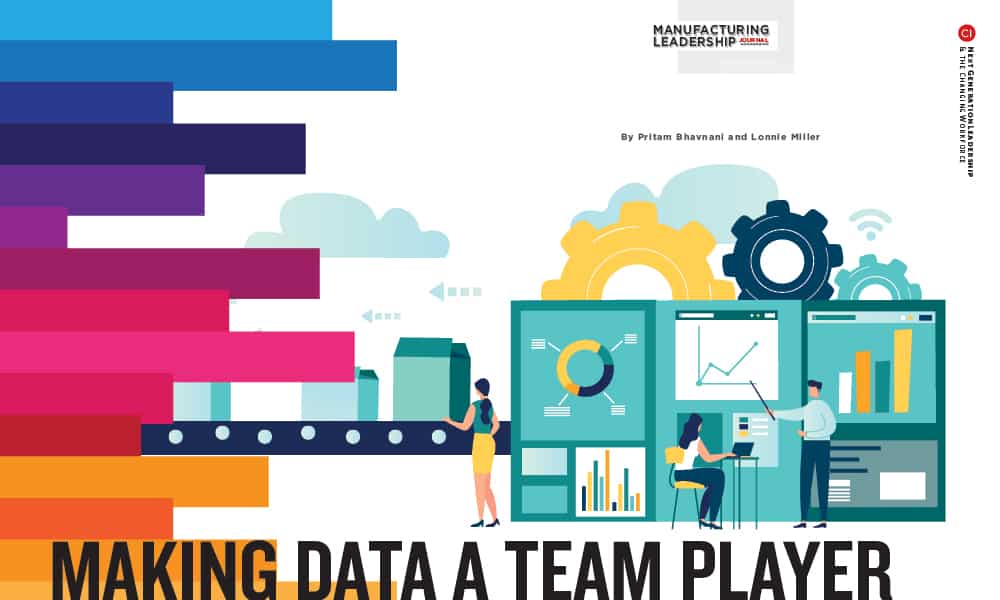 Relying on outside expertise can be a starting point, but lasting results happen when manufacturers develop their own digital bench strength.

In tandem, plant managers and other team leaders seek improvements in such areas as capacity, downtime, throughput, and scrap. All of these help OEE as well as the economics for the site and product margins. However, these tend to be “side jobs” or occasional initiatives to deal with specific problems.

As manufacturing technology evolves, the smart factory becomes more than an aspirational concept. Real capital is being poured into either retrofitting existing sites or dramatically replacing legacy operations with entirely new or near-new plant infrastructure. Yet with many Industry 4.0 initiatives, a suite of data expertise skills is often absent from the plant – a mix of roles representing data architects, data engineers, data analysts and data scientists. This often means that plants aren’t effectively or quickly leveraging things sensor data, batched or historian data, and engineering text notes given the availability of other skill sets and technology.

>In many cases, data experts are hired externally as consultants and reside within a corporate innovation center or IT hub. They are commissioned as needed to assist with select initiatives or specific problems at a site. As a result, they can be foreign to the site itself and, even more importantly, foreign with the resident skills of the teams they need to collaborate with to address specific data-dependent issues. Ideally, leadership should strive to make the data-savvy experts bridge the proverbial digital divide between existing and future infrastructure.

Getting to Better, Faster

Take a past example of efforts to improve product yield at a plant for making disc brakes for aircraft braking systems. For this initiative, data experts were brought to a site and walked through the process so they understood the flow of the disc brakes from raw material to finished product. The data analytics teams also met functional teams with a focus on the design and maintenance engineers who were responsible for improved yield and reduced scrap. The data experts had to learn the plant lingo, abbreviations, and other nuances. After the initial process review, there was a follow up to obtain clarity on the problems to be addressed, along with how KPIs were defined and measured. 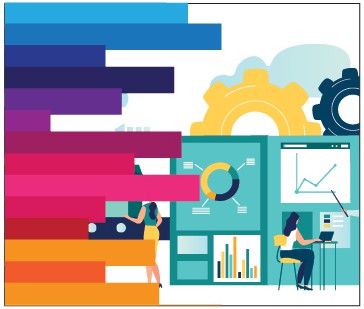 With many Industry 4.0 initiatives, a suite of data expertise skills is often absent from the plant.

A clear problem definition is a very important part of any data analytics initiative, just as it is in any problem-solving effort. With a clarity of purpose and an understanding of the plant manufacturing process, the data experts conducted a detailed data review to identify missing or spurious data. Each available data source was discussed. Each data field with issues was also reviewed with the manufacturing and design engineers to define rules on how to treat such extraordinary data values (such as using an average of before and after values, or otherwise eliminating the data).

In cases like this, a strategic question presents itself: how can the plant ensure expedient collaboration between core functional roles like design or manufacturing engineers and specialty roles like data analysts while using available AI or ML-based technologies? Does the nature of a product quality issue benefit from computer vision systems to detect and score cosmetic or structural defects more quickly on a part? Can historical failure data and failure modes be grabbed and visualized from cloud servers for design engineers to see on a tablet? Can maintenance teams reduce delays in knowing about pending equipment failure when predictive models are deployed to score likely failures based on subtle but harmful variations in ambient temperature or subtle electrical surges?

In the example of disc brakes, external data consultants were able to identify 20+ areas for improvement based on resolving multiple operational categories. As an example, improvements addressed equipment maintenance problems, utilization of older design fixtures, and the cross-usage of multiple machines and multiple tool sets. All of these were causing poor yield, but no single culprit was easily attributed to the earlier causes of scrapped brake discs. These issues were invisible to the design and manufacturing engineers typically tasked with problem solving. In this case, in collaboration with outside analytics consultants, root causes of scrapped brake discs were eventually identified and addressed, raising yield to satisfactory levels. 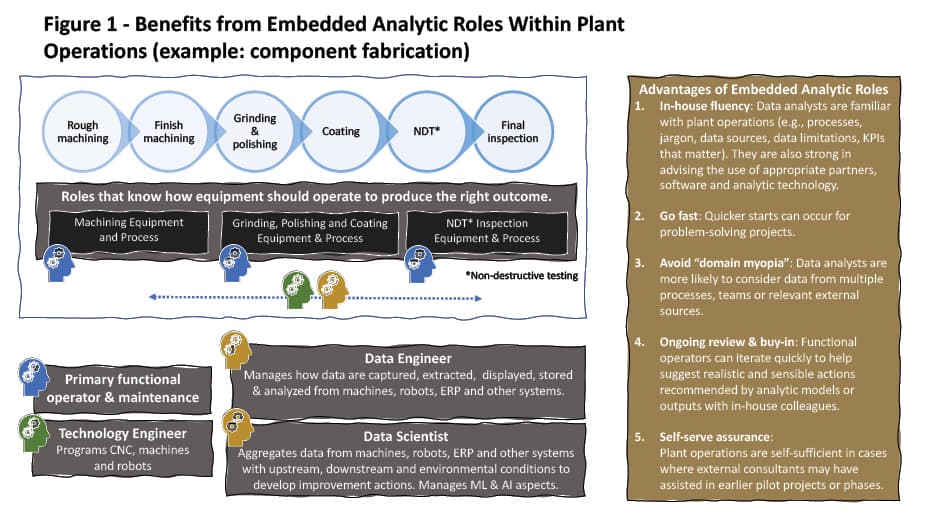 An Old Problem with a New Cause

In the 1990s, Six Sigma Black Belts and Master Black Belts were all the rage.They generally started as a central team of key experts who trained people in the plant functions to be Green Belt or Orange Belt certified. For solving complex plant problems, a Black Belt or would be assigned from the central team, solve the problem and move on. Quite soon the problem would reappear in a different flavor, or as an unintended consequence.

Over time this led to training plant employees to use Six Sigma tools and develop their own Black Belts and Master Black Belts. This brought full-time capability to plants and integrated these skills into the plant organization as their critical problem solvers. That was when the application of Six Sigma tools took hold and became leveraged in the plant on a daily basis. Having “free” knowledgeable and embedded resources in the plant eliminated the need for cost proposals, approvals, and time spent getting to know the plant. Case in point: Over the course of five years, General Electric deployed Six Sigma training, effectively upskilling every employee in the company. They provide both tools and skills to enable future process improvements and resulted in company savings of $12 billion1.

Today, we are in the same situation, but now with Data Black Belts – aka data analytics experts. The opportunity to upskill in-house expertise to shape ongoing improvements has never been stronger given any plant’s rich data repository.

Another good case study is that of Tata Steel2. Taking on a committed journey, they trained approximately 130 employees to be adept and comfortable with analytical techniques to help them solve complex issues like getting the right set points to improve throughput by 8 to 12 percent. As a result of optimizing their superheating process for steel production, immense financial gains (and global acclaim) were achieved. In a big way, their operations and teams evolved. Tata Steel embraced upskilling their in-house talent and, arguably, created their own next-gen set of Data Black Belts. This is common for several leading-class manufacturers who embrace not only using new technologies and tools, but also investing in the right mix of talent to capitalize on digital transformation opportunities using data. 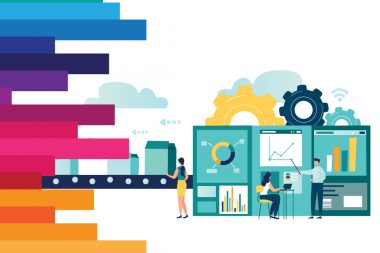 Leadership should strive to make data experts bridge the digital divide between existing and future infrastructure.

The analytical tools and capabilities are applicable in process and discrete industries, but the implementation into the plant workforce, by upskilling, is the key element to make it impactful in a continuous and sustainable manner. Often with the initial assistance with external analytical resources, most companies find that investing in its own people has paid dividends. Getting experts from outside to help certainly pays off, such as for fast proofs of value on pilot projects, but teaching plant teams “how to fish” while using relevant technologies, developed models and/or tools will make investments more impactful in the long run.

Data for the Whole Team

A recurring theme of frustration with plant operations and the manufacturing sector overall is about having the right talent – or lack thereof. This not a news flash. In the NAM Manufacturers’ Outlook Survey respondents express their primary business challenges. In Q1 2021, the second highest category was “attracting and retaining a quality workforce” (cited by 65.8% of the responding manufacturers – falling second only to worries about increased raw material costs)3. In Q1 2020 using the same measure, this workforce deficit issue ranked as the top concern among responding manufacturers4. Can a stronger and more collaborative presence of data engineers and analysts help other roles operate more efficiently or be more empowered to run their equipment or reduce scrapped parts? We believe so and it proves out with many firms that invest this way.

A final thought: there is typically little dispute about the investment tied to indirect roles at a plant such as Six Sigma members, HR directors, safety, environmental, sustainability and other support functions to keep the site and workers improving, compliant and in good health. Arguably, the same can be said for any plant’s extended team to invest in, and organize for, skilled analytics experts. These roles also contribute to the plant’s overall health. There is no reason not to apply data analytics to safety (such as near real-time alerts based on injury/risk scores), HR (a bank of employee churn estimates), environmental (continuous set point adjustments for plant power optimization) and other aspects of a plant.

As factories become smarter, so must the staffing and collaboration models that impact the profitability of a plant. While the cliché trilogy of improvements hailing from “people, process and technology” is all too familiar, operations will not improve without the right mix of human talent and skills pointed at the right opportunities.

Shifting from External to Internal Ownership

Organizations will hire external analytic consultants for assistance with ways to solve challenges like improving product yield on a line, addressing poor process optimization, or gaining a better picture of customer data that has never been simple to see in the past. For the benefit of the manufacturer, a transition plan should always be written. This improves the chance that realized gains from pilot projects or multi-phase implementations can be sustained. As part of these transition plans, necessary skill sets should be itemized and defined.

In one case, an automotive OEM had not prepared their in-house teams to take over the updates and modifications of certain customer scoring models. These models were used for knowing likely future customer satisfaction measures which impacted actions owned by sales, service and parts operations. The customer scoring models were built using software they currently licensed and solely ran on data that the OEM possessed.

Yet the mechanics of the model’s scoring algorithm were not fully internalized by in-house team members.

When the ask had been made of the OEM’s staff to own these processes later in the year, there was an absence of necessary skills which threatened this expectation. As part of the plan to ensure they could take over future updates and make modifications to these customer satisfaction models, training plans were written that also included classes to take and the sequence in which they should be taken. As part of the transition package, this firm was also asked which outside market skills the OEM should consider hiring in the future. To that end, a full job description for a data scientist was drafted and submitted to the OEM. This allowed them to quickly start recruiting for the right talent – in this case, an individual contributor with necessary analytical skills. It was realized no amount of coursework was going to fully satisfy the transition plan until appropriate skills were acquired and made part of the OEM’s analytic team.