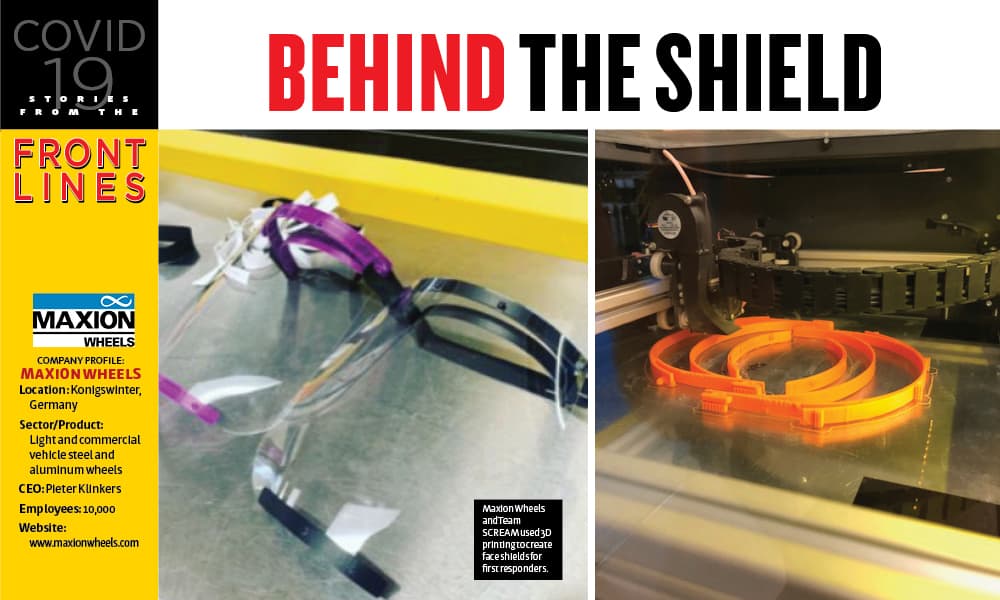 Maxion Wheels, a global manufacturer of light and commercial vehicle wheels, has been producing car steel wheels in Sedalia, Missouri, for more than 40 years. Located just 90 miles east of Kansas City, the plant has a long history of community involvement. The company also abides by its commitment to be innovative and to live by its values to have a positive impact. When the COVID-19 pandemic began to unfold, the team was eager to meet a very serious local need to create personal protection equipment (PPE).

You might be thinking, “What does a metal stamping wheel manufacturer know about PPE?” As it turns out, not much. But this didn’t stop the Maxion team from trying.

It started when Maxion Wheels longstanding partner, the Smith-Cotton High School competitive robotics team, reached out with an idea to make face shields. Team SCREAM (Smith-Cotton Robotics, Engineering, and Mathematics) builds robots to compete in the FIRST Robotics competition. The team started in 2011 and was set to appear in the FIRST World Championships this year in Houston. Sadly, due to the COVID-19 pandemic, the league was forced to cancel the remainder of the season, including the championship event.

Maxion Wheels̕ Plant Manager Scott Woolery said that the company has been a mentor to the team for many years, assisting the team in certain aspects of their robotic builds. While the team’s world championship dreams had been dashed, the students were determined to take part in efforts led by FIRST teams nationwide to help with the emerging crisis. They reached out to Maxion with a plan to make face shields for local frontline workers in the Kansas City area.

While Maxion Wheels didn’t have firsthand experience with making PPE, they knew they had design and engineering know-how, equipment that could be utilized for production, and now an eager group of students ready to make a difference. The two organizations got busy making face shields.

“Competing in FIRST trains the kids to work under strict rules and with limited time and resources — exactly the environment we faced with the need for PPE,” Woolery said. “The school reached out to us with the idea, and we got started right away by programming our 3D printer to produce the plastic headbands to which the clear plastic sheet is adhered.” 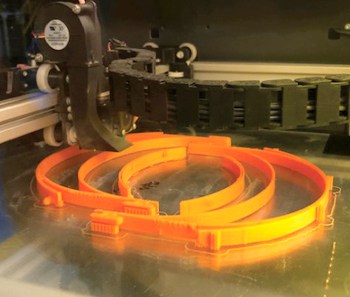 With Maxion and Team SCREAM working together, the first prototypes were completed in less than eight hours.

In what was a true community effort, the plastic used to make those clear plastic sheets is being donated by The Potter’s House Church of Camdenton, Mo., whose members began preparing early for a community outreach effort. According to a report in the Sedalia Democrat, the church accumulated enough plastic to make about 14,000 shields.

FIRST bills itself as the ultimate sport for the mind because students are challenged to design and build a robot that can perform certain tasks, then compete with other team-built robots to complete those tasks the fastest. But beyond building the actual robots, the students are also responsible for fundraising to support the team, creating a team brand, and acting as an advocate for STEM. It’s great preparation for careers in STEM-related fields like advanced manufacturing, but also an excellent way for students to learn entrepreneurial and other important business skills.

With Maxion Wheels and Team SCREAM working together, the first prototypes were completed in less than eight hours, and the first set of 30 shields were delivered in just eight days. Since then, the team has optimized the process and delivered another 40 face shields to the local Bothwell Regional Health Center and the Sedalia Fire Department.

The COVID-19 pandemic is likely to create many changes to the way that manufacturers do business, and Maxion Wheels is no different as the company prepares to move from response to recovery. Maxion Wheels is proud to help in this time of crisis, continuing a legacy of meeting the need when challenge arises.   M