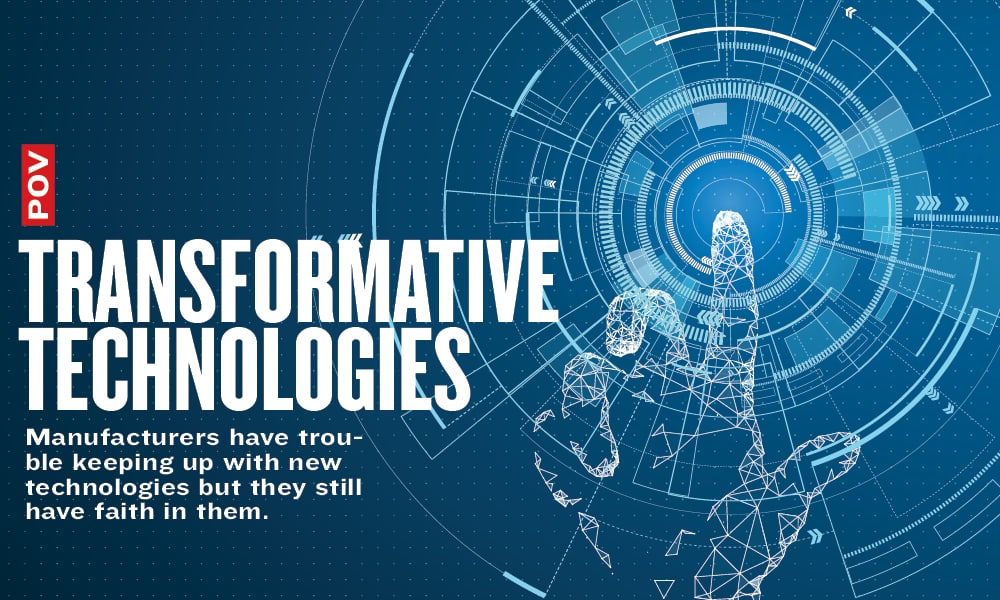 Sometimes the most interesting things about surveys are the contradictions they reveal. Over the many years of doing surveys here at MLC, I have been witness to many seeming contradictions involving manufacturers’ perspectives about technologies, leadership, competitiveness, and a host of other topics.

For example, manufacturers will say, on the one hand, that they are intent on acquiring and using technologies to improve their operational efficiency and cut costs for their companies. On the other hand, a notable number will say that their companies have not really established any kind of formal plan and strategy to get there.

Similarly, manufacturers are convinced that the smart use of data holds the key to future competitiveness, but many report that they have no real, viable way to measure the value of the increasingly large amounts of data they are generating from all manner of processes, equipment, and people.

In MLC’s latest survey on Transformative Technologies, 60% of respondents say they agree with the statement that the accelerating pace of new technologies has caused them to fall behind in their ability to evaluate and understand their potential.

Yet, when asked specifically what they think about the potential of technologies such as AI, IIoT, 3D printing, AR/VR, and collaborative robots over the next five years, manufacturers are uniformly positive, even enthusiastic, that not only will they be significant forces in their companies but that some of them will be truly “game changers” for the industry.

So what can we make out of these findings? Is the optimism about the potential of these technologies, given that most companies are at an early stage with them, based on a leap of faith about their efficacy? Are people simply persuaded by effective hyperbole coming from technology suppliers? Or do manufacturers have enough of a theoretical understanding of these technologies to project their importance and effectiveness with some accuracy?

My sense is that it boils down to faith in the future, an optimism that progress will be made. So bring on the contradictions. I’m OK with them.     – David R. Brousell