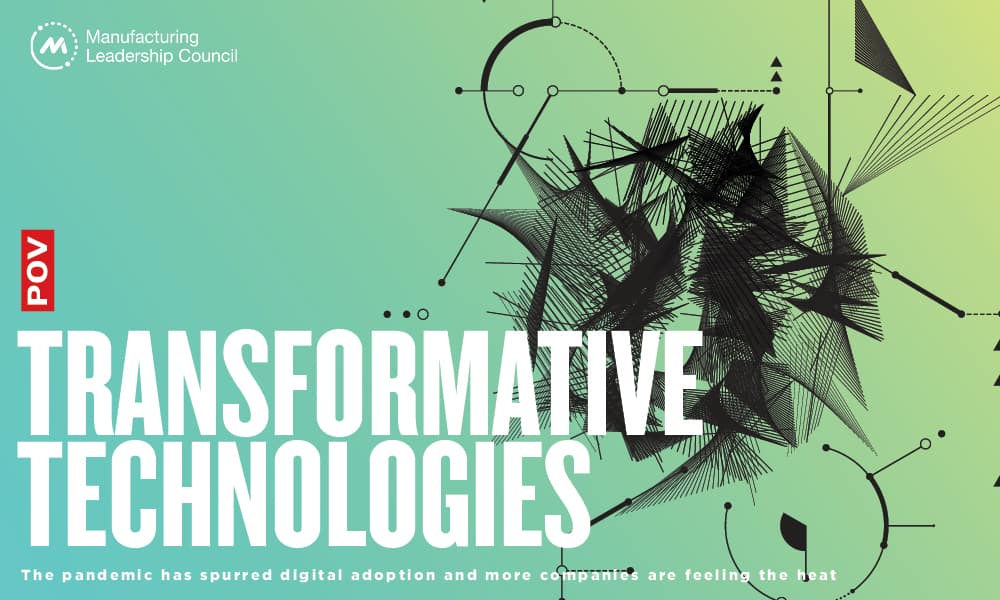 One of the few positive things to emerge from the pandemic has been a greater sense of urgency on the part of manufacturers to embrace Manufacturing 4.0 technologies. Spurred by the need for greater flexibility, agility, and speed to deal with disruption to everything from the front office to supply chains, manufacturers have reacted by accelerating their adoption plans for a range of technologies, from remote working platforms to plant floor monitoring systems.

MLC’s new Transformative Technologies survey, results of which are published in this issue, reinforce and expand upon the trend to accelerate adoption, first reported by MLC in June of 2020. The new survey shows that 51% of respondents plan to accelerate their adoption of operational and information technologies as a direct result of the pandemic, up from 43.7% in last year’s survey.

But what has been perhaps an unexpected consequence of this greater sense of urgency on the part of manufacturers is their perception that the competition for digital capability, and, hence, competitive advantage, has heated up. One of the key findings of the new survey is that some manufacturers now feel they are falling behind competitively in the digital race. This year, only 5.5% felt that they were substantially ahead of their competitors with M4.0 technologies, compared with 11% last year. And 21.8% saw themselves as slightly behind competitors, up from 13.5% in 2020. Those feeling parity with competitors, at about one-third of the sample, was pretty much unchanged with last year.

Perhaps it is only natural that, when the stakes rise in any competition, those involved feel the pressure and question the speed of their progress. Despite best efforts, competitors could move faster and more effectively no matter what a particular company does. It is also possible that a company’s expectations for progress by a certain time were frustrated by internal difficulties in evaluating, selecting, deploying, and realizing value from M4.0 technologies, resulting in feelings that they had slipped competitively.

Whatever the actual reason or combination of factors is, however, the fact that companies are feeling the heat is a good thing. The heat will create more energy for the industry as a whole to build digital strength. And that will benefit all companies. – David R. Brousell