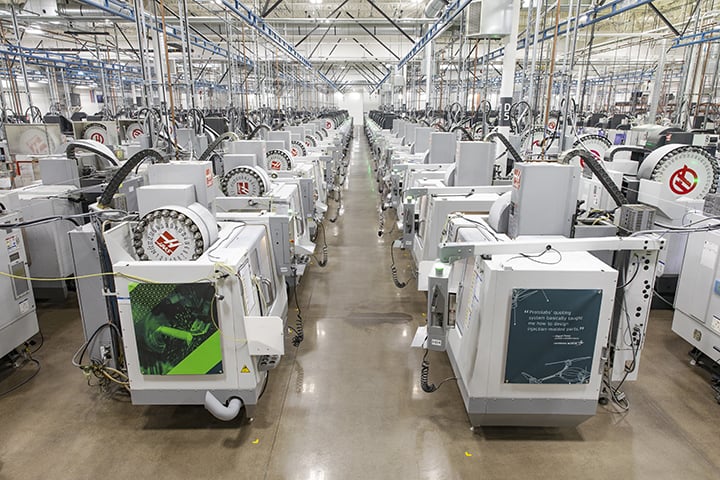 Only July 22, the Manufacturing Leadership Council hosted its first-ever virtual plant tour in conjunction with Protolabs, a manufacturer of custom prototypes and on-demand production parts. More than 300 attendees joined the tour, which “visited” six of Protolabs’ U.S. facilities across three cities.
Protolabs was founded by Larry Lukis in 1999 as a rapid injection molding business in Maple Plain, MN. It was originally called Protomold. Frustrated with not being able to get prototypes quickly, he decided to start his own business that would begin with a customer’s problem and then work backwards to automate and scale the necessary solution. The company later expanded into CNC machining services, and opened facilities in Europe and Japan.
CEO Vicki Holt joined the company in 2014, and the company then acquired Fine Line Manufacturing to add 3D printing to its service portfolio, followed by Rapid Manufacturing for sheet metal fabrication. Today, Protolabs is an end-to-end digital manufacturer of custom components with locations in three states and seven countries.
Protolabs has developed a robust ecommerce platform where customers can upload 3D CAD files 24/7 and typically receive an interactive quote within a few hours. The customer receives a digital twin of the part for their inspection, and they can work with Protolabs’ engineering team if they want input on their designs.
The tour began at the company’s injection molding facility in Rosemount, MN, which processes more than four million parts per month. This segment of the tour was led by Gurvinder Singh, Protolabs’ Global Product Director, Injection Molding. Singh said that the standard lead time for a new mold is 15 days, but with rush options a design can often be delivered within one day. In addition to the Rosemount facility, Protolabs also has another injection molding facility in Plymouth, MN.
Rosemount has 125 presses that typically handle part run volumes from 1-25,000 parts, but sometimes make more than one million parts. Protolabs will store customer molds to allow for follow-on parts and offers additional finishing services like adding textures or inserts or printing logos on parts. Injection molding services were a critical element to Protolabs’ COVID-19 response efforts as they allowed the company to make parts for ventilators, face shields, test kits, and masks.
From there the tour went to the CNC machining facility in Brooklyn Park, MN, led by Holt, who is a member of the MLC’s Board of Governors and a member of the Board of Directors of the National Association of Manufacturers, the MLC’s parent. With 380 machines running in the facility, noise levels became a problem so the company installed acoustic insulation in the ceiling to minimize how long sound bounces, taking the sound down several decibels. Protolabs further enhances safety at this facility with a fall arrest harness system for employees who are working on top of mills. The company has an enhanced machining facility in Nashua, NH, that allows for more complex parts via 3-5 axis machining as well as lathe and wire EDM.
The company tries to ensure that it will have enough capacity to ship orders on time every time. When capacity nears its peak, Protolabs brings more machinery online to handle the additional demand. The CNC facility is automated through machine programming, allowing for highly repeatable processes and high quality. Other machining-related services offered by Protolabs include turning, drilling, finishing, and quality control.
The next stop on the tour was the Protolabs 3D printing facility in Raleigh, NC. Led by Rob Bodor, VP and GM, Americas, it is believed to be the largest 3D printing contracting manufacturing facility in North America. The company has the capability for 3D printing with both plastics and metals and can work with a broad range of materials and part sizes. There are 70 stereolithography machines in a range of sizes that can build features as fine as a human hair. Protolabs deploys stereolithography (SLA), selective laser sintering (SLS), direct metal laser sintering (DMLS) PolyJet, Multi Jet Fusion (MJF), Carbon DLS, , technologies to make a variety of parts rapidly.
The final stop was at Protolabs’ sheet metal fabrication location in Nashua, NH, again led by Holt. The plant is broken into two sections, one focused on complex assemblies and the other on speed and scalability. The operation for complex assemblies includes laser cutters, punch presses, press brakes and other hardware, and material selections include aluminum, stainless steel, cold rolled stock, galvanized steel, and brass and copper. Every order is cut from 40×40 blank sheet to reduce waste.
Moving to the second area of the sheet metal plant designed for simpler parts, this plant is built around express work cells, each with their own laser cutter, press brake, punch and hardware station, set up in a cellular layout with an operator who is trained across all of the equipment in the cell. Each day the operators meet in a daily huddle to cover performance metrics, and they contribute to idea boards aimed at continuously improving how the cell works.
During the attendee Q&A following the tour, Holt described their end-to-end digital thread and how they manage all business processes in the same system, so that every piece can connect and talk with every other piece. This digital connectivity allowed Protolabs to respond rapidly in service to its customers at the beginning of the pandemic crisis, especially medical customers.
Holt also discussed the company’s quest to build further resilience and agility into its supply chain in order to always be crisis-ready. While the company is a global business, it operates off of regional supply chains. Holt also praised the responsiveness and resilience that digital technology can introduce to the supply chain during times of crisis.
A complete recording of the plant tour is available here. Watch for notifications from the MLC regarding future digital plant tours.