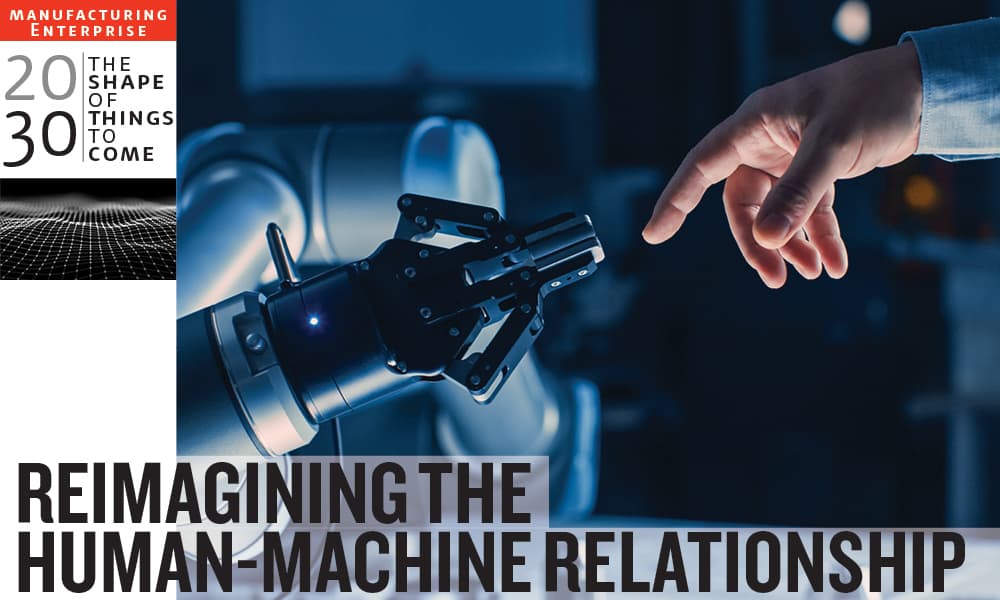 Manufacturers must prepare the human workforce now to work
alongside increasingly collaborative, even sentient, robots. By Sath Rao

As of 2019, 2.7 million industrial robots were hard at work in factories and manufacturing centers around the world, the most ever reported.1 This trend is likely to continue, as countries leading the way in manufacturing across sectors — South Korea, Germany, Japan, and the United States — also lead in robots per worker. Globally, there are 113 robots per 10,000 workers; heavy hitters like South Korea have more than 850 robots per 10,000 workers.2
These numbers confirm what many already intuitively understand — we have arrived at what we called “machine dominance” in the Factories of the Future seminal research I wrote with David Brousell in 2017. We are now living in an era of humans and machines working together.

Have we really gotten to the paradigm shift we predicted where robots and humans have learned to work together in a relationship between unequals?

A robotic paradigm is often described as the relationship between the three basic elements of robotics: sensing, planning, and acting. Behavior-based robots (BBR) increasingly provide a sense of biological-appearing actions — not a pre-programed approach but a more human-like one replete with mistakes, confused actions, and also with an anthropomorphic quality of tenacity.
Now the question is: As machines become more like humans, what do humans do?

Welcome to the Human-to-Machine Convergence

Humanity’s feelings about robots rarely come from the manufacturing floor or the boardroom — our sense of apprehension about machines and robots comes mainly through popular culture. Now this is intensifying as machines that once only capable of being programmed for simple, repetitive tasks have become much more sophisticated, with companies like Boston Dynamics developing humanoid robots that are capable of complex, acrobatic behaviors.3

Robots are also moving in the direction of sentience. (In machines, “sentience” refers to self-awareness and the ability to respond to or anticipate changing conditions, rather than human sentience, which is more complex and subjective.4) This combination of physical, intellectual, and sentient capacity means that humans and robots will be entering into an increasingly collaborative relationship. This human-to-machine (H2M) convergence brings the perception of risk — will this machine replace me? Can it perform my tasks better than I can? Is Dexter better than me?

Art Markman, professor of psychology and marketing at the University of Texas, says that when confronting unique problems like this, it’s necessary to reframe the challenge in order to change the outcome: “A radically new solution requires a new problem statement.”5

To reframe the problem, we need to understand that machine dominance isn’t about machine superiority. After all, machines will age beyond their useful life much like humans — machines die too! But machines are becoming more mobile and interactive, and they will become more present in our work and daily lives. We can benefit if we have a better understanding of the coming changes and the opportunities for the future of manufacturing. 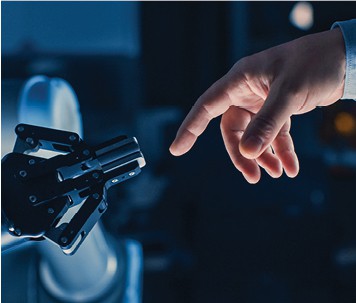 “H2M would not just augment the physical limitations but also the limitations of the human mind.”

Henry Ford is credited with developing manufacturing as we know it — mass production of identical products by using an assembly line in which the product moves from station to station and parts are pieced together. This process became the foundation for manufacturing around the world.
In the framework I developed for Vision 2030: The Factory of the Future,6 the convergence revolution has moved manufacturing beyond that simple approach. The world of instantaneous connection has changed consumer expectations, placing a premium on speed, customization, and product support for the entire product life cycle. Hyper-personalization, in which every product is a discrete unit of one, brings us into a manufacturing environment in which the product is a service.
This new paradigm has given rise to some significant H2M convergence opportunities in manufacturing:
From Restrained to Untethered for Frictionless Flows. Instead of a standardized product flowing through a production line, the product will remain in one place and the robot will come to it to perform various tasks to create a customized product. Advances in robotics have eliminated the need for machines to be tethered in place; they can be mobile.
Robots and Humans Together for Scale. Improvements in safety technology make it possible for humans to work in close proximity to robots without danger. Robots that interact and collaborate with humans, known as cobots, will enable the production of highly customized products at scale.
Machine Intelligence and Automated Workflows for Impact. The days of sending a service worker to the product location for repairs and maintenance or routing a product to a service and repair center, are coming to an end. Today, connected products can be continually monitored with sensors, their data can be collected and analyzed with cloud-based technologies, and over-the-air updates can provide maintenance and product changes without human intervention.

“This human-to-machine (H2M) convergence brings the perception of risk — will this machine replace me?”

These new paradigm changes mean that robotics for labor cost arbitrage alone is not the dominant paradigm. H2M convergence will force us to reconsider our fundamental belief in relationships as being symbiotic, not adversarial.

Data Is Stronger than Beliefs

How ingrained will robotics be in the future of manufacturing? Enormous players like China saw their industrial robotic inventory rise by 21% in 2019, while India has doubled the number of robots it employs in the last five years.7

These numbers point to a mandate that is more multifaceted than just competitive. Robots are not just productivity enhancers; they can also improve quality and contribute to manufacturing resilience. The acceleration of robotics across the industrialized world is happening quickly, spurred on by dramatic changes to the way we work and consume as a result of the global pandemic. It has also quickly changed the way leaders in manufacturing are planning for the future.

Taking the Next Steps in Human-Machine Convergence

Digital industrial transformation is about orchestrating humans and machines and data. As manufacturers face an aging workforce, they need to plan to meet their changing production needs. Younger workers are more apt to be interested in manufacturing careers if the industry modernizes, and robotics and automation are key parts of that modernization. The shutdowns and slowdowns forced by the pandemic have also made it clear to manufacturers that robotics will be valuable on the shop floor in the future.

Even beyond manufacturing, the economic realities and opportunities of robotics and machine intelligence are becoming clearer. H2M would not just augment the physical limitations but also the limitations of the human mind. The choices we face are not up to the machines, they’re up to us. Human beings are uniquely intelligent, and the future of our partnership with robots and machines will be enhanced by that intelligence. Ultimately, workflows that enable unique insights and gains have to be at the speed of thought. In the next 20 years, humans and machines will be more deeply enmeshed, embedded in the dura mater and beyond. If Singularity has not arrived by then, it will at least be imminent!   M