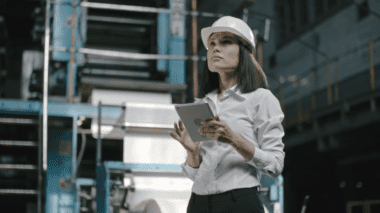 What do women in manufacturing think about the business they’re in? It’s not something we hear a great deal about, which is perhaps not surprising. Manufacturing is a male-dominated industry, after all. For half a century women have represented around 30% of the U.S. manufacturing workforce, peaking at 33% in 1990, according to the U.S. Census Bureau (USCB).

By number, most female employees are found in production, transportation, and material moving. They are assemblers and fabricators, says the USCB, inspectors and testers, among other roles.

But, proportionately, women enjoy far greater representation in the sales and office-based roles of manufacturing companies, where they are in the majority, holding 51.7% of the roles.

So it’s important to know what they think. Earlier this year we surveyed over 500 manufacturing professionals from a range of industries, including aerospace and defense, automotive, space, electric vehicles, autonomous vehicles, to understand the challenges associated with product-related communication and knowledge transfer.

In line with the USCB data, female employees accounted for 28% of responses. And while we did not set out to measure gender distribution across industries (and so, offer no conclusive insight) there was some interesting variation by sector. For example, women accounted for just 21% of responses in the aerospace and defense sector while in the emerging SpaceTech sector they accounted for 35%, and in the automotive sector 32%.

When it comes to existing product communication workflows – the ways in which documentation describing products and processes is created, shared, and consumed – the data was clear: 71% of female employees believe there is room for improvement in these workflows, and the same proportion believe documentation challenges at their organization are getting harder to manage as the company grows. Ninety-seven percent of female respondents said they had seen products or projects hit by errors or delays as a result of documentation being late, inaccurate or unclear, or outdated.

Digging further into specific elements of the workflows, and perhaps indicating areas where female employees may have greater insight, women were more acutely concerned about bottlenecks associated with the creation of product documentation than their male counterparts. Sixty-five percent of female respondents reported that creation bottlenecks are a frequent problem at their organization compared to just 51% of male respondents.

They also felt more strongly that managing distribution of, and access to, important documentation was a problem, with 43% of women saying this was difficult for their organization to manage, compared to 36% of male respondents.

With documentation creation and consumption routinely involving collaboration between separate departments, we asked respondents how well different disciplines such as engineering and marketing professionals were able to collaborate. Here, female respondents were perhaps more optimistic than their male counterparts, with 30% saying there were no difficulties, compared to only 20% for male respondents.

In terms of the outcomes of these workflow challenges, women again registered somewhat higher levels of concern than men. Forty percent of female respondents said they had witnessed wastage through product defects as a result of product documentation being delayed, inaccurate or unclear, or outdated, compared to 38% of male respondents. And 38% of women said the same problems had led to delayed or missed sales opportunities, compared to 32% of male respondents; interesting considering the USCB data which showed higher numbers of female workers in manufacturing sales roles.

Perhaps more worryingly, one in three female manufacturing employees believe their organization is not actively seeking ways to improve documentation workflows and processes, which suggests a huge opportunity for improvement if the problems these women are identifying can be highlighted and understood at the leadership level.

So what does success look like for women in manufacturing? Well, with 37% of female respondents saying the applications used in documentation workflows are unsuited to the task, 33% saying there are too many applications involved, and 39% saying there are too many people involved, the data suggests women want to see more autonomy and efficiency in these crucial knowledge transfer workflows.

As in any sector, women have an important role to play in manufacturing and it is essential we understand their perspective on the challenges companies face. A clear takeaway from this research is that female employees believe the manufacturing industry faces a defining challenge when it comes to poor communication and product documentation, which is intricately connected to the success of the entire organization. And when the processes in place break down, the result is self-inflicted damage that could – and should – have been avoided.