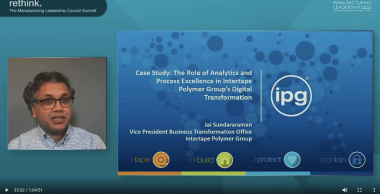 Intertape Polymer Group (IPG) is undergoing a digital transformation, and it’s doing it without an army of data scientists and data engineers, revealed IPG’s Vice President of Business Transformation, Jai Sundararaman, during the MLC’s 2021 Rethink Summit this week. Instead, the company is rolling out its digital analytics platform by doubling down on process engineers and its operational excellence team.

When IPG, a producer of packaging and protective solutions with 27 manufacturing plants around the globe, began its digital transformation journey about three years ago, it quickly became apparent that, despite a plethora of articles on the topic of M4.0, there is no proven industry playbook companies can take off the shelf and implement, noted Sundararaman. “Success is hard-earned and based on experimentation,” he added.

The first thing the company did was to make a capital investment in its digital transformation, based on broad-based support from its operations leader, CEO, CFO, and board, “Which is critical,” stressed Sundararaman. IPG investigated more than 15 analytics platforms, with help and input from data from the MLC as well as advice from other MLC members. While no one platform is going to work for everyone, he noted that the MLC network had helped IPG shape its thought processes in these initial stages and determine which platforms to take on a pilot run.

The next investment was in talent. “It’s about rescaling and upskilling the talent, as well as establishing what we call the Digital Process Center of Excellence,” he added. “Our mantra is, ‘We believe in empowering employees with technology’…people are going to learn and grow as part of the process.” This means that the company didn’t double down on analytics per se. “We doubled down on our continuous improvement and process engineering. My team are the subject matter experts on the process side, and they work along with IT and OT specialists and the Continuous Improvement team, all of whom have a dotted line relationship with the plant teams. So when they go into a plant, the process is streamlined. This enabled us to get commitment for the resources as we scale across the plant.”

While IPG is still in the early phases of scaling analytics around multiple plants and executing pilot programs, it is already seeing success. “We have noticed the ROI is less than two years, which we’re very proud of,” said Sundararaman. Its work in centralizing management systems has also proven to deliver successful ROI. Still in the early phases are projects around augmented reality, virtual reality, and 3-D printing, though those also look promising.

One key to success thus far has been how IPG is leveraging analytics through process excellence. “It starts with a mindset, and commitment, and cultural enablers,” he said. “It’s not going to happen in one shot.”

Because success is not guaranteed, you must also be willing and able to embrace failure along the way, he advised, and learn from those failures to move forward. Don’t be too quick to come to a standardization mindset either, he noted. The technology continues to evolve, so the journey will be ongoing.

“The most prudent thing is to focus on what will create business value,” emphasized Sundararaman. “The value is critical. It’s not Step 5. It’s Step 1 through 5. We have been very meticulous in terms of our approach to where value creation will be, how we engage the different partners, and how to capture that value as we go on through the process.”

And you have to be willing to take risks, he added. There are tools, methodologies, and some pointers and guideposts along the way, “but you have to figure it out and then take a leap of faith.”