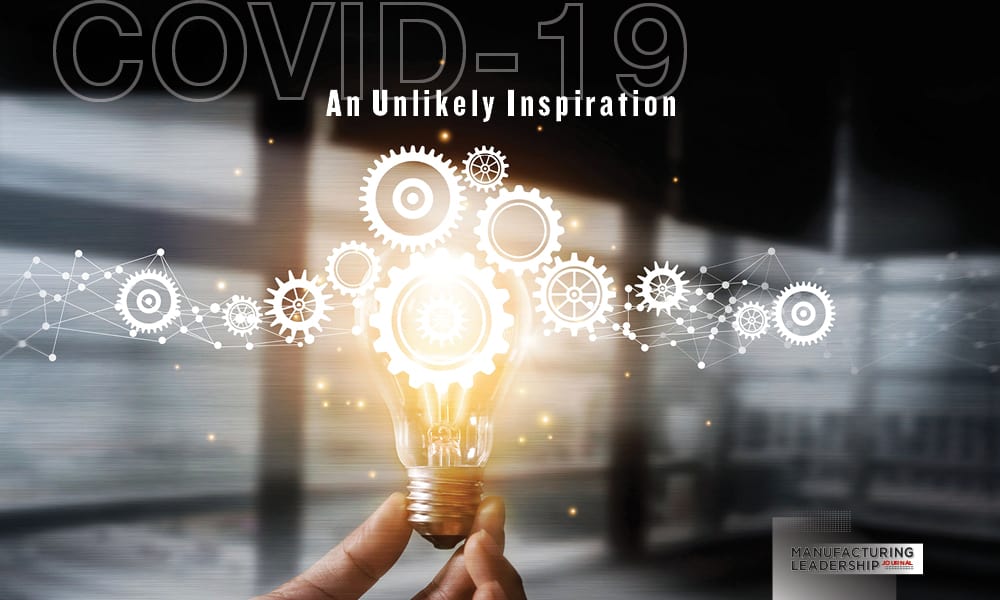 Spurred by the need for agility and flexibility in a time of crisis, manufacturers appear determined to accelerate their investments in digital technologies.    By David R. Brousell

As the year 2019 was drawing to a close,  it appeared that momentum was building for manufacturers to adopt advanced technologies as a key part of their journey to Manufacturing 4.0, the next wave of industrial progress based on digitization. And then, in February, the unexpected occurred — COVID-19 struck like a bolt of sustained lightning, upending life as we knew it.

By the end of June, U.S. Gross Domestic Product had fallen at a 31.7% annualized rate, the deepest decline since record keeping began in 1947. Nearly 30 million Americans were receiving unemployment checks by the week ending July 11. And by mid-September, there were 6.5 million COVID-19 cases and nearly 194,000 deaths in the U.S.

Between February and April, manufacturing production plummeted 20.3% and even after four straight months of improvement, the industry was still down 6.7% at the end of August, compared to where it was in February. Capacity utilization followed a similar pattern, dropping to 59.9% in April, the lowest rate since data gathering began in 1948, from 75.2% in February, and then recovering somewhat by the end of August when it reached 70.2%. And so the big question around Manufacturing 4.0, a nearly decade-old evolution that had been moving at a slow but steady pace, was would manufacturers be forced to put their digital technology investments on hold or scale them back significantly in order to weather the crisis and, if so, what damage would a hiatus have on the trajectory of the digital model?

The answer to that question was immediate and profound. The pandemic is shaping up to be an unlikely inspiration for change. Manufacturers’ ability to quickly pivot and produce pandemic-fighting materials and equipment was clearly linked to their digital maturity. Companies that had already invested in digital technologies were in a far better position to respond to the crisis than those that did not or did not do so sufficiently.

A poll conducted by the Manufacturing Leadership Council in May showed even stronger evidence that Manufacturing 4.0 was not going to be slowed down – 53% of respondents indicated that their companies would accelerate digital investments as a result of the pandemic.

A new MLC poll, fielded in August, shows that number slipping but still robust. In that new poll, the MLC’s annual Transformative Technologies in Manufacturing survey, 43.7% of respondents indicated that their companies will accelerate spending on information and operational technologies as a result of the pandemic. Twenty-five percent indicated that spending will be unchanged (compared with 36% in the June poll) and 30.3% said that spending would decline (compared with only 7% in June). In addition, more than 79% of respondents also said that their companies would accelerate adoption of technologies that enable virtual working and remote monitoring of operations. (Charts 1, 2). As might be expected, conducting surveys in the midst of an on-going pandemic is an exercise fraught with unpredictability. Because of unknowns such as whether new surges of infection will occur, when a vaccine will be become available, and what the long-term damage to businesses might be, it is very difficult for companies to plan and budget. Current intentions around advanced technology investments could change at any time depending on circumstances.
But the new MLC Transformative Technologies poll, while raising concerns that spending may be cut back as the damage inflected by the pandemic is more fully felt in the months ahead, does offer some encouragement that manufacturers continue to be focused on the future, and what advanced technologies can do to make that future a digital one. Moreover, the new poll has certain strains of consistency with prior MLC surveys, most significant of which is manufacturers’ longer-term view of the transformative impact of advanced technologies.
For example, across a range of 13 technologies surveyed, artificial intelligence once again this year strongly leads in respondents’ investment intentions over the next two years, a position that AI has held in MLC surveys for the past several years. This year, 38.7% of respondents indicated that their companies would invest in AI in the next 12 to 24 months. Digital twin modeling and simulation software comes in second, with 34.5% of respondents saying their companies will invest in this technology within the next two years, and supply chain management software comes in third, with 28.7% (Chart 4). 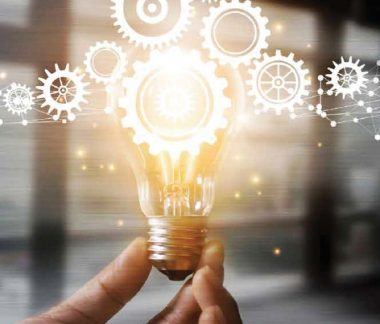 Manufacturers continue to be focused on the future and what advanced technologies can do to make that future a digital one.

The Promise of AI

AI has apparently captured the imagination of manufacturers for what it promises to do to improve the effectiveness of automation, mine increasingly growing volumes of data from operations including factory floor equipment, and, as a result, cut costs and boost productivity. In fact, across eight application areas asked about in the survey, AI applied to preventative maintenance of plant floor equipment was clearly the stand-out, with 62% of respondents indicating it as a key application area, the highest by far in the survey. Quality and production planning came in second and third, with 56% and 35%, respectively (Chart 8).

But as it is with all advanced technologies, adopting, implementing, and optimizing their use takes time, and usually more time than initially expected. Right now, just over one-quarter of respondents indicate they are underway with AI on a single-project basis; only 3.6% say they have implemented AI enterprise-wide in all of their factories. Many others are in the process of becoming aware of the technology, conducting research, or defining a roadmap for adoption and implementation (Chart 7).

And when MLC asked about the potential impact of AI and its cousin machine learning, an interesting divergence of opinion emerged, one likely influenced by where on the AI maturity curve a company may stand. Today, only 11% of respondents are of the opinion that AI will be a “game-changer” in production. But over the next five years, this number jumps to 48.6%. </p?
On the other hand, 29.3% of respondents today see AI as significant but not a game-changer. Over the next five years, this group grows to 35.7%, but the rate of growth is markedly less than those who believe that AI will indeed be that game-changer the current hype would have us all believe.

Other advanced technologies are also showing robust investment intentions.
Among communications and networking technologies, so-called 5G technology, in which only 11.7% of respondents have currently invested, is slated for significant growth over the next two years. By then, 45.9% of survey takers expect that their companies will have invested in the technology.

The Internet of Things, which has a much higher current penetration rate of 51.3%, is also showing strength, with 29.7% saying they will invest in the next 12 to 24 months (Chart 3).
In production technologies, predictive maintenance, plant floor simulation and modeling, and collaborative robots garnered the strongest buying intentions over the next two years (Chart 5). And the adoption of digital thread technology, a key factor in enabling companies to share data across different systems and processes, is also expected to grow strongly (Chart 6).

The most important reasons manufacturing companies want to invest in these advanced technologies are that they are looking to reduce costs and improve operational efficiency, improve visibility of operations and create agility and flexibility, and, a result, up their game competitively.
But many face an array of obstacles in reaching these goals. Asked to assess a list of 12 challenges associated with adopting and using transformative technologies, survey respondents indicated that the top three hurdles are migrating from or integrating with legacy systems, assessing cost and benefit of the new technologies, and developing a cohesive M4.0 roadmap (Chart 16).
The roadmap issue continues to bedevil many companies. A lack of a roadmap most likely indicates a low level of digital maturity. It may also reflect that companies may not have figured out how to organize around the digital opportunity.
Only about 21% of respondents indicate they have a formal M4.0 roadmap that has been adopted across their organization. About one-third say their approach is informal and tactical and nearly 20% say they really don’t have a strategy at all (Chart 10).
Part of the reason for the lack of organizational cohesiveness around M4.0 may be that responsibility for M4.0 continues to be quite diffused. Who should take the reins in developing a strategy that will affect the entire organization?

Artificial intelligence has captured the imagination of manufacturers by what it promises to do to improve operations.

About 29% of survey takers say that joint IT/OT teams have been charged with responsibility for devising and implementing M4.0 technology strategy and a roadmap, while 27% say that responsibility is the domain of the manufacturing vice president. Another 12.6% say the job rests with their chief operating officer (Chart 11).

As companies strive to sort out the responsibility question, they also struggling with two other key issues – developing M4.0 ROI models that make sense for their companies and finding people with the digital skills that can execute an M4.0 plan (Chart 13). Given the state of the manufacturing workforce, which is still suffering from hundreds of thousands of open jobs, the latter issue may be solved earlier than the former.

Despite all of the challenges, many companies feel they are in front of or at least keeping pace with competitors in the race for digital advantage. Nearly 40% of survey respondents think they are ahead of their competitors to one degree or another, but only about 11% would say they are substantially ahead. About one-third claim they are even with competitors and about 18% believe they are behind (Chart 15).

In coming months, the race will play out against a backdrop of continued economic uncertainty instigated by the pandemic. The pace of digital technology adoption will certainly be influenced by the larger economic context. It may slow down or speed up depending on the circumstances, but one thing appears certain – the road to the future is digital and nothing, not even a pandemic, will change that. M

1 Many to Accelerate IT, OT Spending as a Result of COVID

Q: What effect has the COVID-19 pandemic had on your company’s investment posture for information and operational technologies? 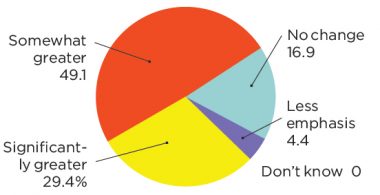 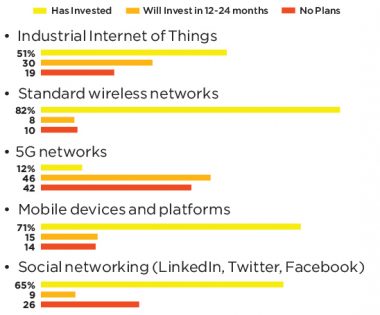 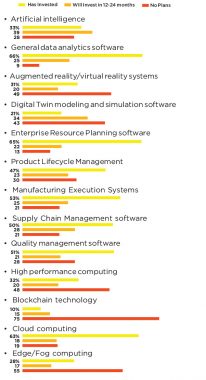 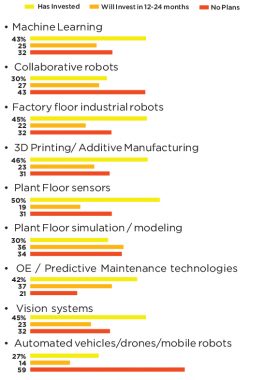 6  Nearly One Quarter Has Implemented a Digital Thread

Q: Has your company implemented a digital thread approach to sharing the data generated by one or more of the M4.0 technologies you have adopted?

7  One Quarter Underway With AI Projects 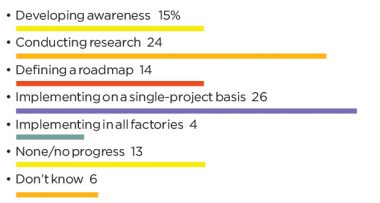 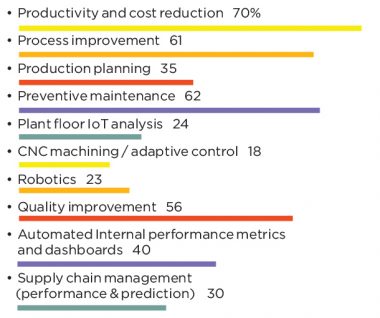 Q: What is your current assessment of the potential of artificial intelligence and machine learning, both today and in five years’ time? 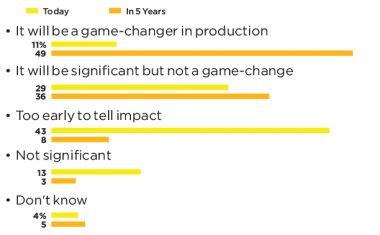 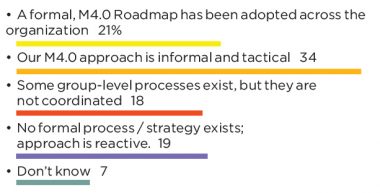 Q: Who is responsible for devising and implementing your M4.0 technology roadmap / strategy? 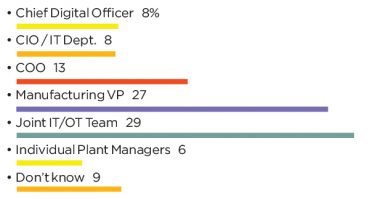 Q: What are the three most important reasons your company invests in transformative M4.0 technologies?

13  Proof of Payback, Skills Are Chief Inhibitors to M4.0

Q: If your company does not invest in M4.0 technologies, what’s the primary reason?

14  A Majority Struggles to Keep Pace With Technologies

Q: Please indicate the extent to which you agree with the following statement: The accelerating pace at which new technologies are emerging is causing us to fall behind in our efforts to evaluate and understand their potential.

15  A Mixed Bag on Competitive Position on M4.0

Q: How would you assess the following challenges related to adopting and using transformative M4.0 technologies? 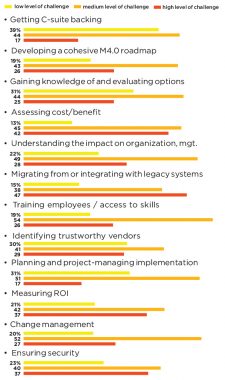 17  Few Are ‘Well Prepared’ to Deal With Data Volumes