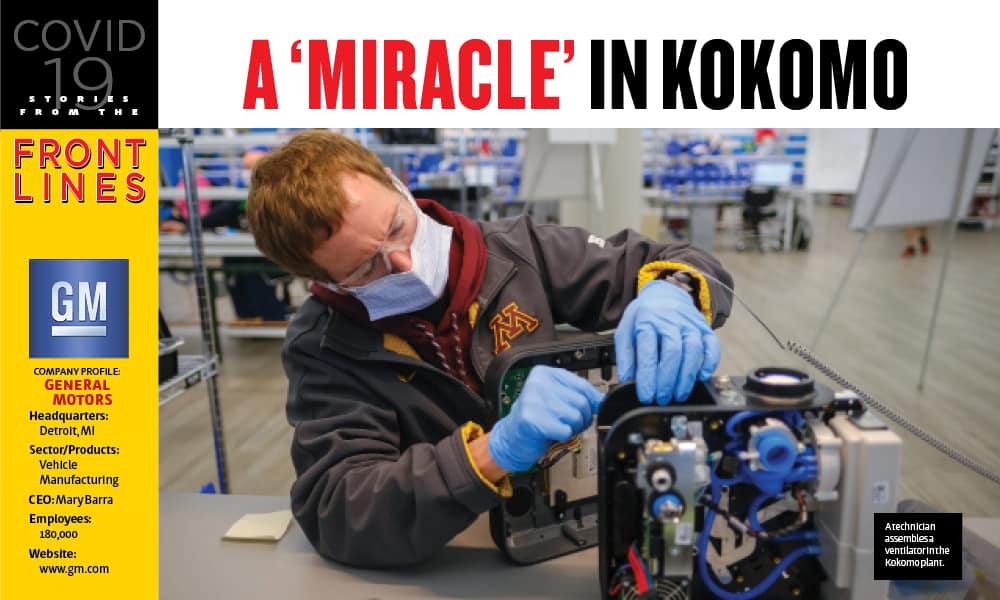 Manufacturing 4.0 technologies enabled GM to pivot production in record time to make ventilators and masks during the COVID-19 pandemic.

Over the past several years, GM has focused on transforming into a flexible manufacturing organization ready to respond to the unexpected. However, COVID-19 wasn’t what anyone expected. There’s no better example of GM’s agility than what it’s doing in this unprecedented time.

The team’s dedication, hard work, and sheer will to succeed in a time of crisis, combined with technology and collaboration, helped accomplish what some may call the impossible.

“I asked everybody to have a mindset of what if your parents, your wife, one of your children had this COVID disease and absolutely needed one of these ventilators — how far would you go to get this into production, how fast would you move?” said Phil Kienle, GM’s vice president of North American Manufacturing and Project V lead.

This ethos was enabled by strong executive leadership under GM Chairman and CEO Mary Barra. The team was empowered for immediate decision making, and there was no limitation on resources the company made available.

In addition, GM’s rapid response was enabled by its dedication to digitize its work environment and leverage technology to work faster. Credit goes to the Fourth Industrial Revolution and Manufacturing 4.0, which allowed GM to cut the start-up time for ventilator production in Kokomo to weeks and masks in Warren, Michigan to days compared with months typical of most projects.

For example, data capture technology was used to model and simulate the manufacturing process in Kokomo. This included data scanning, data modeling, cycle-time monitoring, and system simulation. It also involved creating virtual environments for build validation, ergonomic assessment of workstations, and operator training. This enabled physical construction of the assembly operation simultaneous with the engineering and validation of it.

It took the joint GM/Ventec team less than 30 days to deliver the first ventilators.

Girded by the team’s resolve and the technologies, the joint team moved from the first conference call to the first ventilator deliveries in less than 30 days. Chris Kiple, the CEO of Ventec, called this remarkable accomplishment “a miracle.”

Another incredible feat by the team is the seven-day startup of face mask production. In addition to the ventilator shortage, the pandemic created a critical shortage of face masks, meaning the heroes on the front lines of the crisis were without the protection they need.

With the help of engineers, designers, buyers, and manufacturing, GM converted its Warren manufacturing facility to produce up to 50,000 masks per day, or approximately 1.5 million each month. Code named Project M, this project used the power of GM’s global knowledge, with engineers from China providing lessons learned from their earlier mask operation startup. Utilizing the capabilities of GM’s Warren Additive Manufacturing Facility, 3D printing was a key technology applied to this project, producing flexible assembly fixtures key to the rapid startup and ramp-up of mask volume.

GM also shared its face mask blueprints with its global supply base and with other companies through the National Association of Manufacturers, further enhancing the global supply of this critical personal protective equipment.

“Being part of the advanced connected manufacturing ecosystem and openly collaborating digitally accelerated our ability in ways we never dreamed of before,” said Gerald Johnson, GM executive vice president of Global Manufacturing. “I’m so proud of our team who worked tirelessly around the clock to move mountains and harness the power of GM to benefit the greater good during this pandemic.

Not only has digitization enabled the company’s emergency response, but it continues to support manufacturing engineers working upstream, uninterrupted, to keep product programs like GM’s T1 SUVs at the Arlington Assembly plant in Texas and its future family of EVs moving forward. This team also began restart operations remotely.

Lessons learned from these critical safety projects have already changed GM as a company. For returning to production operations in the post COVID environment, GM is utilizing the safety protocol developed and validated in the Kokomo and Warren operations to help keep everyone safe, and accelerating technology application will enable GM to operate more productively in the new work environment. Safety is and continues to be GM’s overriding priority.  M