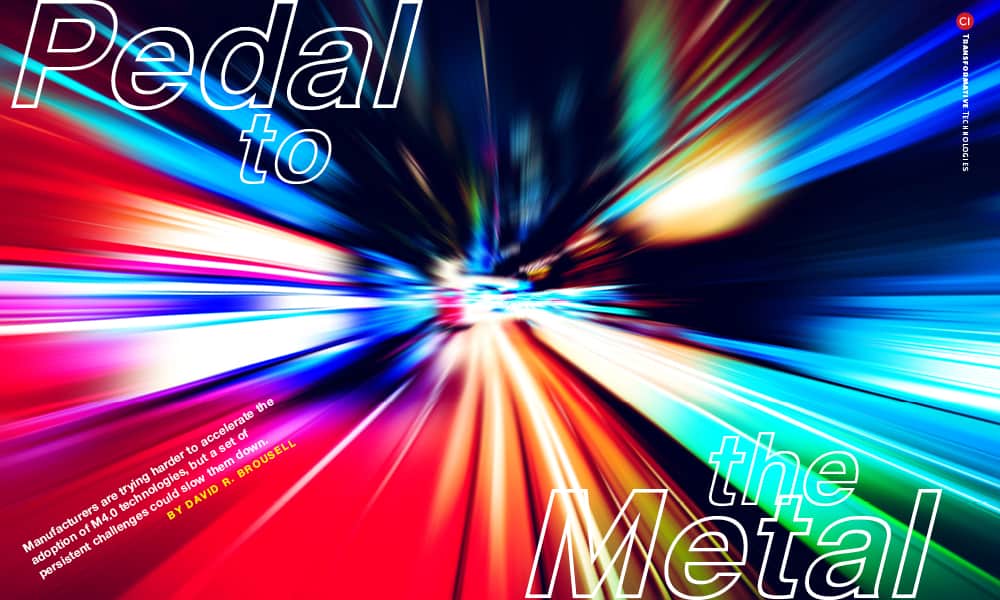 Manufacturers are trying harder to accelerate the adoption of M4.0 technologies, but a set of persistent challenges could slow them down.

The impact of the COVID-19 pandemic is continuing to reverberate across the industrial landscape.

In a series of survey-based reports MLC has issued since June of 2020, manufacturers have clearly indicated that they were accelerating their embrace of Manufacturing 4.0 as a direct result of the pandemic, and the consequent need for greater flexibility and agility.

In MLC’s new survey on Transformative Technologies, one of the Council’s Critical Issues facing manufacturing in its journey to the digital model of doing business, manufacturers indicate they are now pushing harder on the technology accelerator.

In the new survey, 51% of respondents say they will accelerate their spending on information and operational technologies as a result of COVID-19, up from 43.7% saying so in last fall’s Transformative Technologies poll. While more this year said spending is unchanged from last year, significantly fewer – only 6.1% this year, compared to 30.3% last year – said spending will decline (Chart 1).

One area of particular emphasis in their spending plans is technologies than can enable remote working and remote monitoring of operations. In the new survey, the percentage of respondents saying they would significantly expand their adoption of such technologies jumped to 37.9%, from 29.4% last year (Chart 5). Moreover, just over one third of manufacturers expect that remote-enabling technologies will amount to a “game-changer” in production over the next five years. 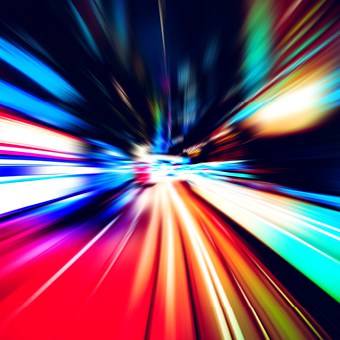 Manufacturers expect remote working and monitoring technologies to be a “game-changer in the next five years.

Taken together, manufacturers’ technology spending intentions reinforce the idea, first suggested by MLC in June of last year, that the industry has reached an inflection point in the adoption of M4.0 as a result of the pandemic. Back then, in a more general poll, 53% of manufacturers indicated they would be stepping up their adoption of digital and automation technologies in response to the pandemic.

In the new survey, MLC asked manufacturers about their investment intentions over the next two years in 14 different IT technologies, including AI, ERP systems, and supply chain management systems as well as newer technologies such as blockchain and quantum computing.

Once again, this year AI is at the top of respondents’ IT technology lists, with 21.6% saying they intend to invest in the technology in the next 12 to 24 months and an additional 25.5% indicating that AI is under consideration in their companies. Closely following AI is digital twin modeling and simulation software and supply chain management software (Chart 2).

But there is a significant difference between the profile of AI and supply chain management (SCM) software in respondent companies. Only about one-third of survey takers currently have AI systems working in their companies. Supply chain software, however, has a much greater current penetration, with more than 61% of respondent companies saying they already use SCM systems. Interest this year in SCM may reflect the supply chain disruptions and difficulties many companies are experiencing as a result of the pandemic. But a similar scenario seems to be playing out regarding manufacturing execution systems, a production technology that has been around for decades and already enjoys a high penetration rate among respondents.

Perhaps predictably, blockchain and quantum computing could be best described as emerging technologies. They both have low current adoption levels and single-digit investment intentions associated with them. But when respondents were asked whether these technologies were under consideration, a step that may indicate evaluation but not necessarily a solid purchase intention, blockchain scored the highest result, 35.4%, of all 14 IT technologies surveyed.

AI continues to capture the imagination of manufacturers far beyond what other technologies seem capable of doing.

In the communications and networking realm, Internet of Things technologies and 5G communications networks scored the highest investment intentions over the next two years, coming in at 18% and 16.6%, respectively. IoT showed considerable muscle, given that 59% claim they have already invested in the technologies. IoT is also one of those technologies that a majority of respondents think will be a game-changer over the next five years. And 5G, with only about 27% currently invested, scored the highest “under consideration” number, at 35.6% (Chart 3).

AI: In a Class by Itself

Of all of the 30 technologies surveyed, AI continues to capture the imagination of manufacturers far beyond what other technologies seem to be capable of doing.

Today, just under 16% say AI will be a game-changer in production environments, up slightly from the 11% saying so in last year’s Transformative Technologies survey. But over the next five years, 54% expect that AI will reach that lofty status (Chart 8).

But right now, progress in implementing and using AI in factory environments appears to be moving slowly, with very little change in the survey numbers between this year and last year when respondents were asked where they stand with single-project implementations and in their work in devising roadmaps.

The one flicker this year occurred with regards to manufacturers’ efforts to scale AI projects across their factory footprints. This year, 7.5% of survey takers indicated that they were implementing AI in all of their factories, up from 3.6% last year. The numbers are small today, but worth watching to see if they develop into a sustained trend.

The pandemic-induced urgency to proceed more aggressively with M4.0 and accelerate investments in M4.0 technologies has seemed to turn up the heat competitively but also seems to be driving companies to get more disciplined about M4.0.

The percentage of companies saying that they perceive they are substantially ahead of their competitors with the adoption of M4.0 technologies dropped to 5.5%, from 11.6% last year. Those feeling they are somewhat ahead stayed flat at about 27% as did those saying they think they are about even with competitors. Those indicating that they are slightly behind competitors grew to 21.8%, from 13.5% last year (Chart 11).

The rush to accelerate M4.0 technology adoption may have resulted in some manufacturers feeling less competitive.

Perhaps motivated by these feelings, the percentage of those companies saying their companies have adopted a formal M4.0 roadmap jumped to 33.4%, from 21.3% last year. This finding was echoed among those indicating that their M4.0 approach has been largely reactive. Only 11.6% said they are in reactive mode today, compared with nearly 20% last year.

A Set of Persistent Challenges

When asked to rate a set of 12 challenges associated with adopting and using M4.0 technologies, survey takers sounded a familiar refrain.

Migrating from or integrating with legacy systems topped the list of challenges once again, with 51.6% of respondents assigning a “high” level of challenge to the issue. Ensuring security, measuring ROI, and change management garnered the next three highest results (Chart 12).

These challenges have occupied a high level of concern for a handful of years, according to MLC surveys, and are likely to remain so going forward because they are so basic to the migration to the digital model of manufacturing. But the key takeaway from the set of challenges is that all play a role to one degree or another, requiring manufacturers to address them all in order to make a successful journey. The trick, as many are no doubt discovering, is how to orchestrate change across so many dimensions, particularly as keeping abreast of new technologies continues to tax most organizations.

Accelerating adoption of transformative technologies to deal with the issues of our time and create new competitive advantages is an important and necessary strategy in the drive to M4.0. But manufacturers could end up tapping their brakes unless they get the orchestration piece right.   M

Q: What effect has the COVID-19 pandemic had on your company’s investment posture for information and
operational technologies? 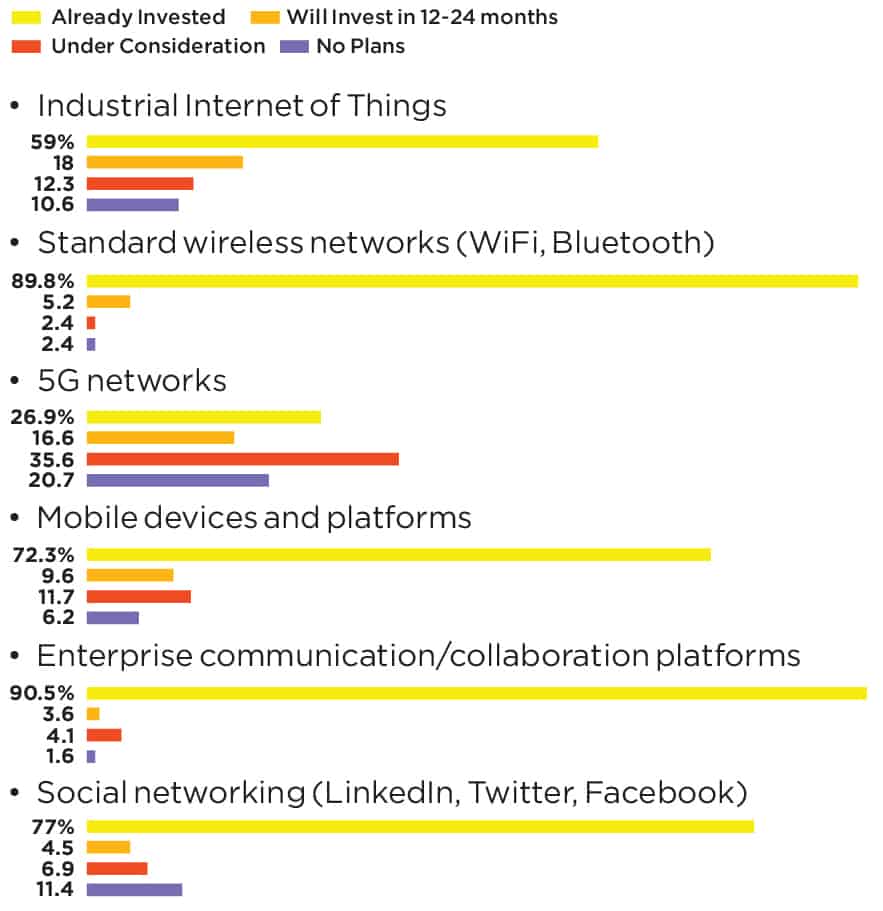 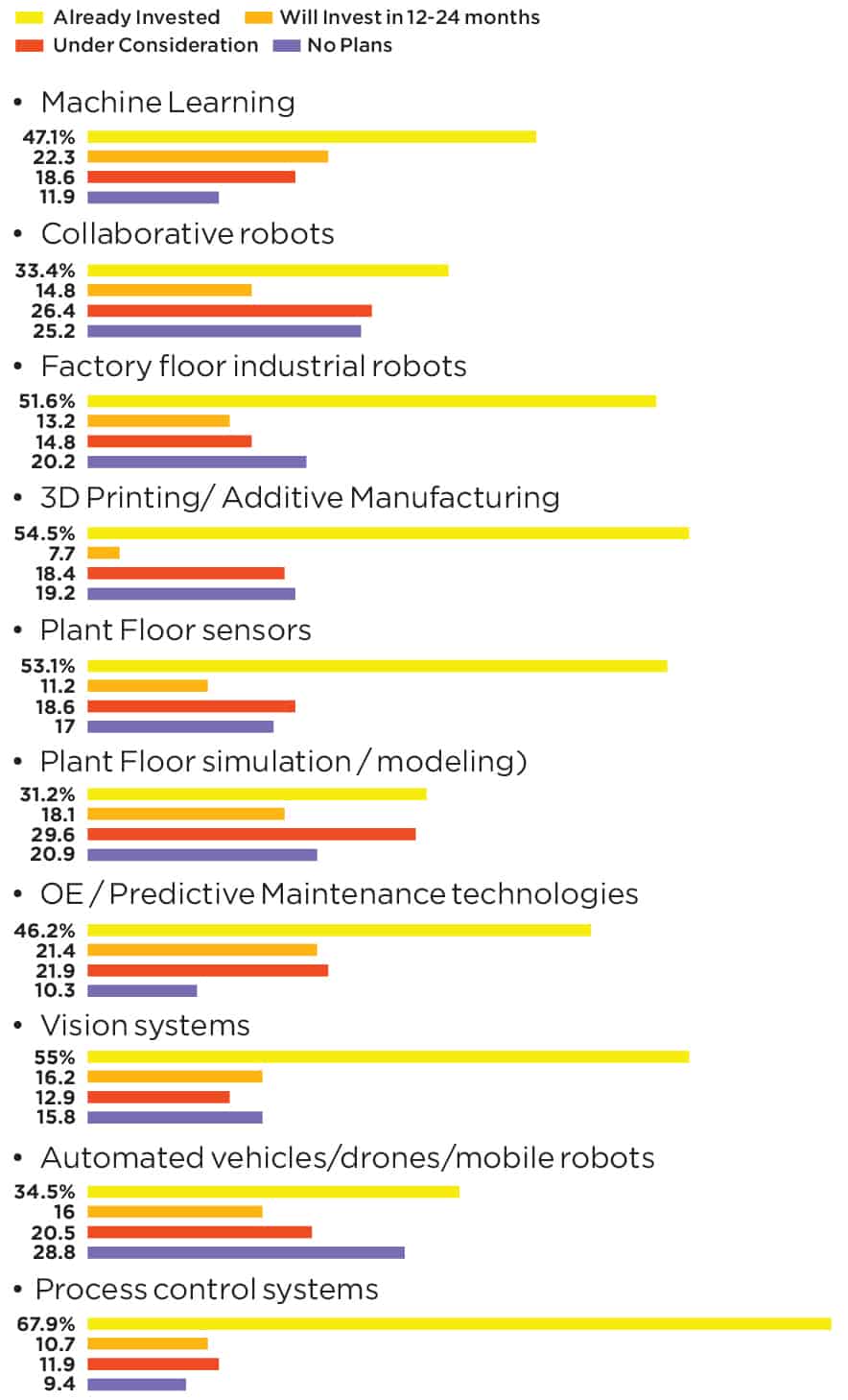 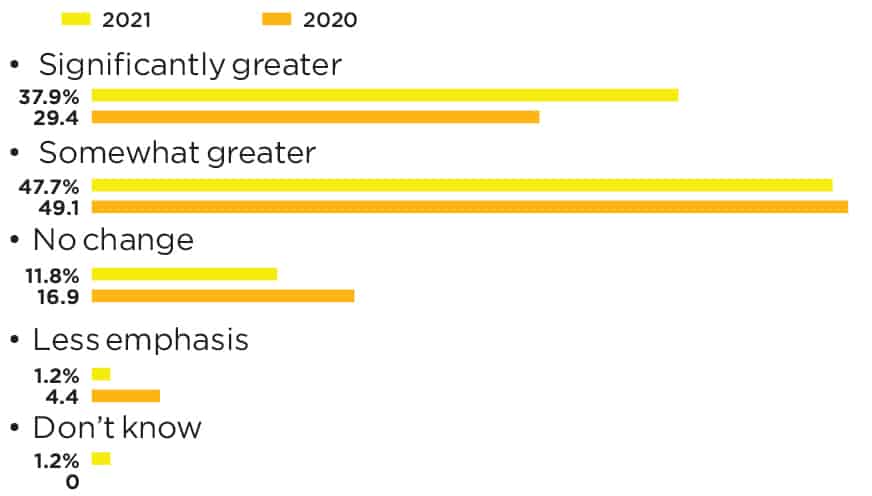 6 Is AI Starting to Scale Across Factory Footprints? 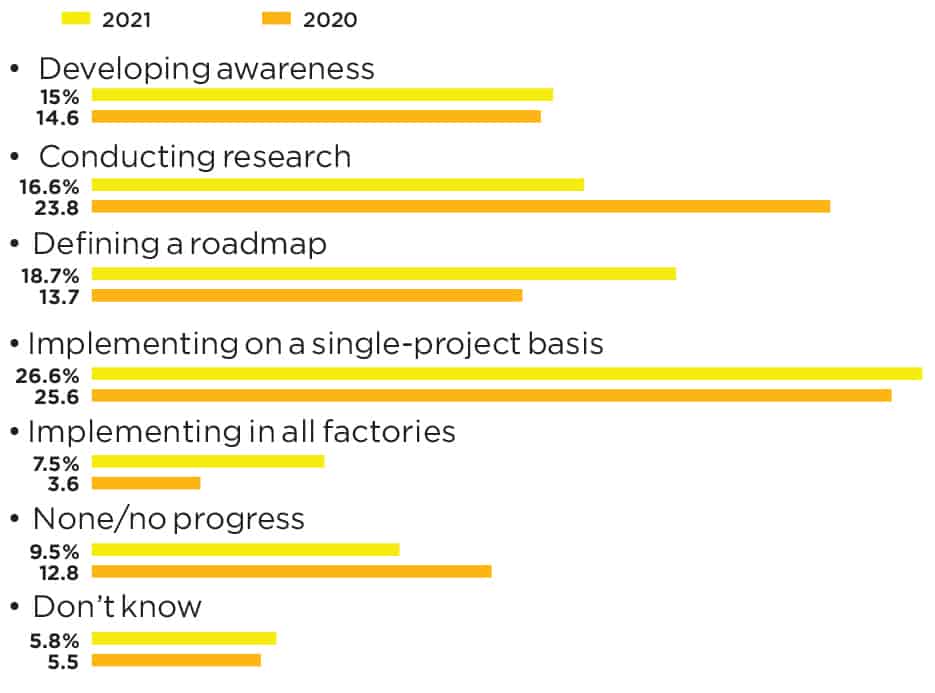 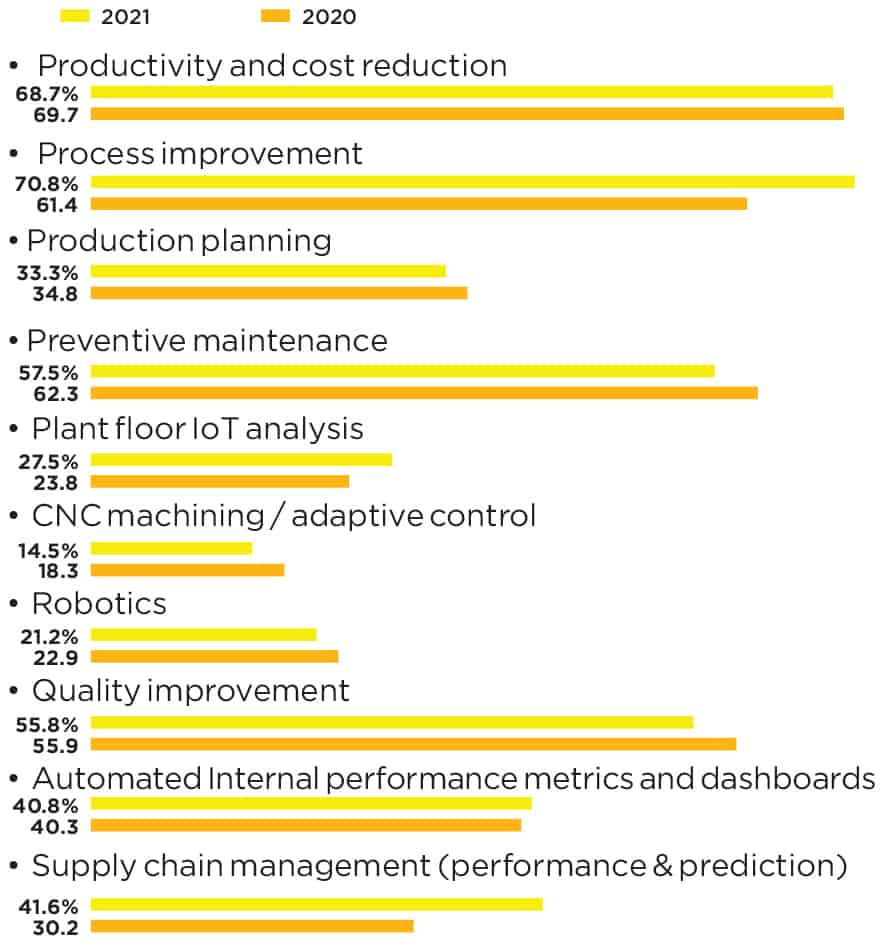 8 For the First Time, A Majority Sees AI as ‘Game-Changer’ in 5 Years

Q: What is your current assessment of the potential of
artificial intelligence and machine learning, both today and in five years’ time? 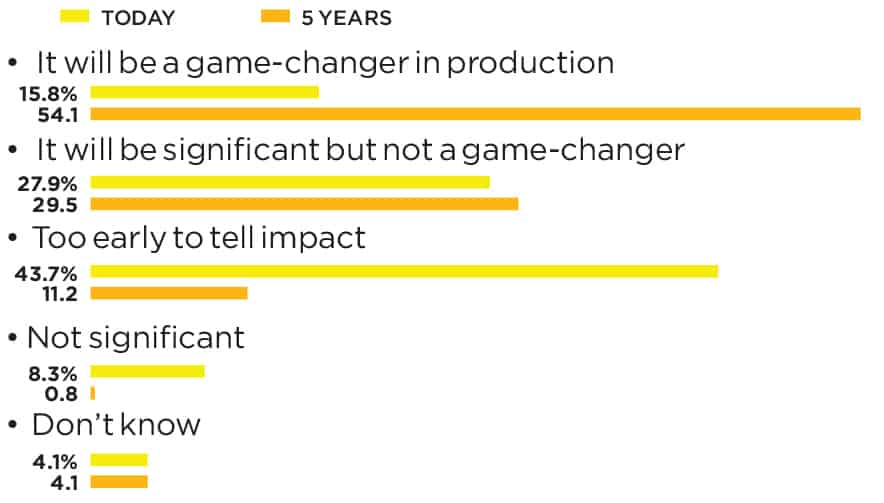 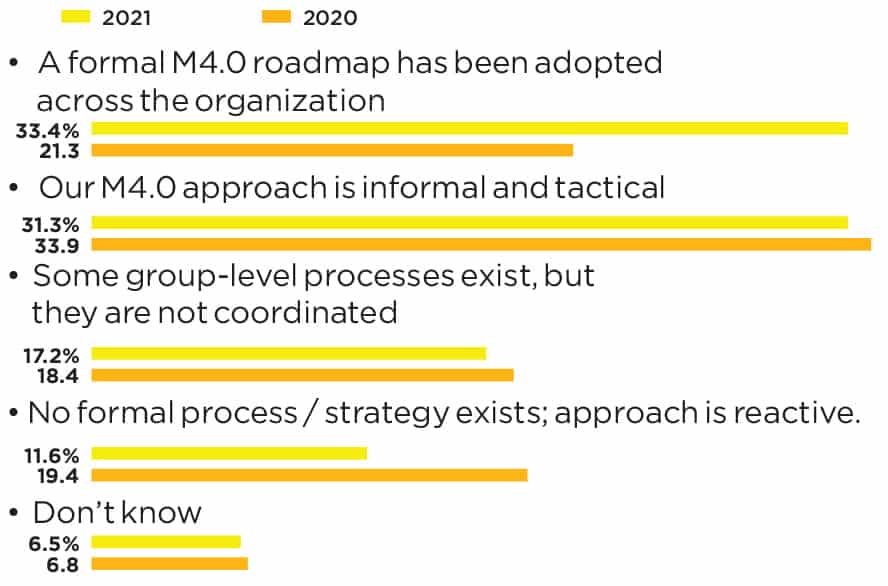 Q: What are the most important reasons your company invests in transformative M4.0 technologies (Select top 3 reasons) 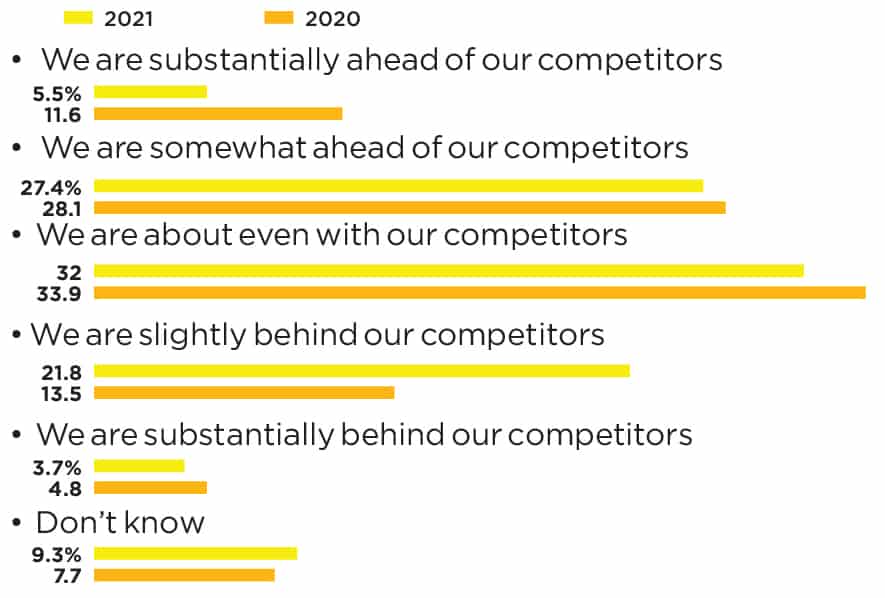 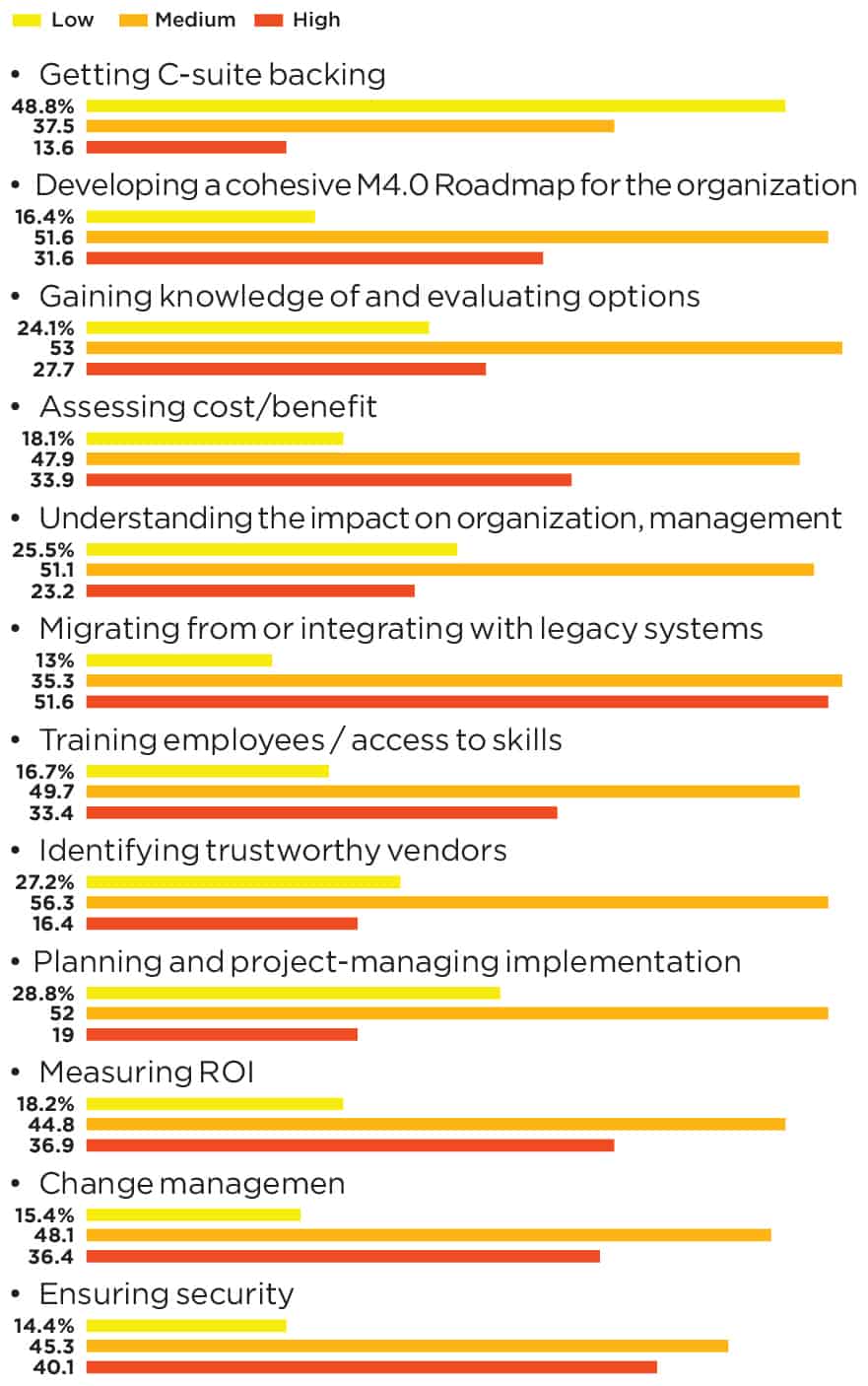