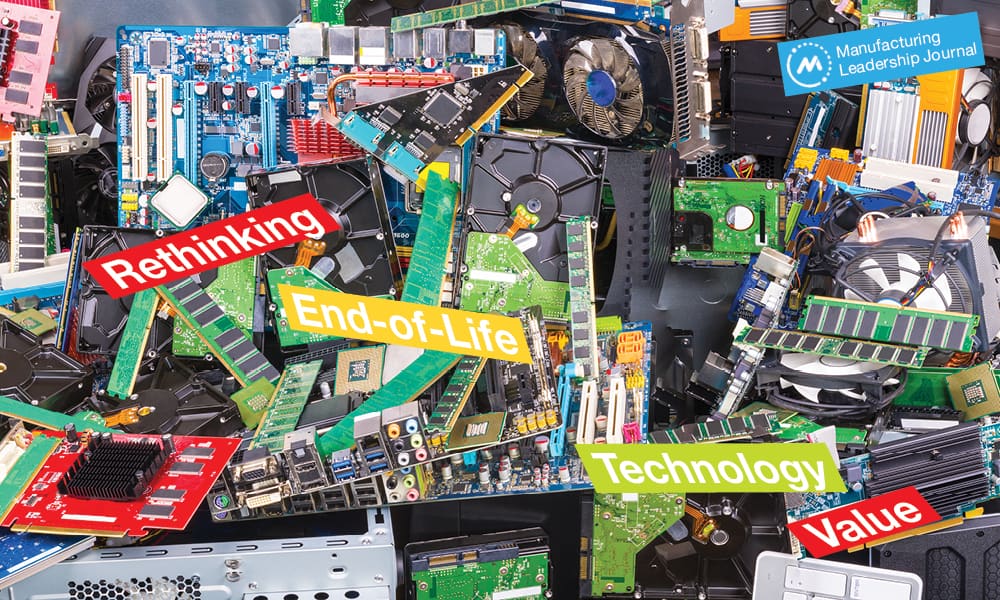 When evaluating technology, manufacturers are most focused on the advancements that can improve production. For instance, what can make assembly faster, scalable, and more sustainable? It’s almost common sense. Manufacturing is about creating new products and bringing them to market as efficiently as possible. More manufacturers, however, notably in the electronics and technology sectors, should be thoughtful about the end-of-life processes and the potential detrimental impact those may have on the environment and their businesses in the later stages of a product’s life.

How big a problem could those end-of-life processes become? A Global E-waste Monitor report found that a record 53.6 million metric tons of electronic waste (e-waste) was generated worldwide in 2019, up 21% over the previous five years. That number is expected to double by 2050, hitting 120 million tons of e-waste annually. Worse yet, it was reported that less than 20% of used electronics are recycled. Instead, even when electronics still house components that are valuable and usable, they’re often exported to developing countries, typically in Asia, and thrown into landfills.

Exporting the problem, or ignoring the problem altogether, is no longer an option, not when there’s more pressure than ever from partners, customers, and politicians to adopt and uphold socially, economically, and environmentally responsible practices today. Plus, there is a growing business case for improving how products are recycled. Global technology companies looking for more cost-effective methods to store or archive inactive data, for example, are increasingly looking to businesses that offer recycled servers for cold storage. 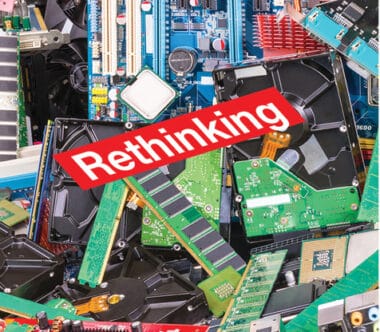 “53.6 million metric tons of electronic waste (e-waste) was generated worldwide in 2019, up 21% over the previous five years. That number is expected to double by 2050.”

As companies start to implement more sustainable practices throughout their operations, seek new sources of revenue, and enhance their digital offerings, they need to consider the entire lifecycle of their product. While some parts and pieces will inevitably have a short lifespan, there’s an opportunity to rethink, rework, and start to reuse the components that still have something to give. To pinpoint what those pieces are, and to retrieve them with efficiency, manufacturing pioneers will need to lean on intelligent disassembly.

The journey that a product like a server goes through is a clear example of the problem today. There are three common options when a server nears its end-of-life. It’s destroyed to ensure that sensitive data is destroyed with it. Or it’s dismantled, and storage devices wiped, so that parts can be reused and sold for less demanding systems. The third option is that it’s recycled down to its precious metal parts, probably somewhere in Southeast Asia. However, this incurs costs and emissions from shipping, and once there, the parts can end up in a landfill or are recycled by people working under exploitative labor practices, with limited ecological oversight.

Yet at end-of-life, there are parts of a server that can be incredibly useful. Getting at them is where the process gets incredibly complex. In fact, anyone who thinks the disassembly process is similar to the assembly process couldn’t be further from the truth. For example, a company might hypothetically know what’s inside a server according to its original configuration, but in actuality, every server is a little bit different. Pieces such as memory or processors, for example, could have changed during its first lifespan. One might have more memory; one might have less. One might have one processor; another one might have four. The final make-up of a server, then, can be quite different from its original configuration, which means the disassembly process will be variable, and unique to each server as well. 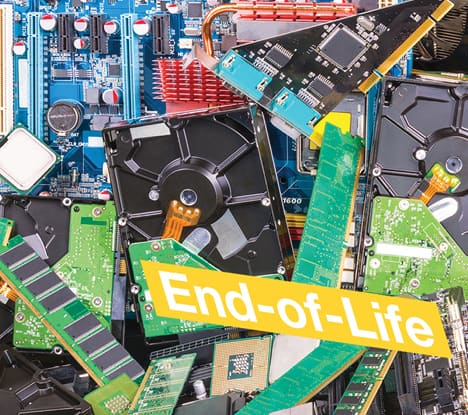 “As companies start to implement more sustainable practices throughout their operations, seek new sources of revenue, and enhance their digital offerings, they need to consider the entire lifecycle of their product.”

Manufacturers have relied on traditional automation for efficient assembly for decades, centering their operations around repeatability and precision of a known recipe or bill of materials. Yet, when it comes to disassembly, they need to have an ability to intelligently navigate what can feel like a random configuration. It’s undeniably complex, laborious, and prone to error, which is why there’s an entire market centered around harvesting servers and reusing components. Unfortunately, it’s a boutique industry, and is almost entirely done by hand.

Whether a company is solely focused on end-of-life, or manages the entire lifecycle, two business cases have taken precedence. In one, a company will gather old servers, screen them to ensure there are still usable parts, then sell those components to global technology companies that need service spares on hand. Then, there are other companies who specialize in securely destroying the servers in order to ensure sensitive customer data does not get into anyone else’s hands.

It’s clear that giving life back to technology that still has value is good for the environment, and for the business.

Improving the end-of-life process will require both intelligent technology and a different way of thinking. It’s time to set sights on improving the profitability connected to reusing and recycling parts. Companies should look for the same effective and efficient process expected from assembly technology so that the old can become new again while achieving better handling costs, more consistent results, and improving margins. The good news is that intelligent automation with machine vision can understand the difference between what the specs say will be in the server, and what is actually in there. 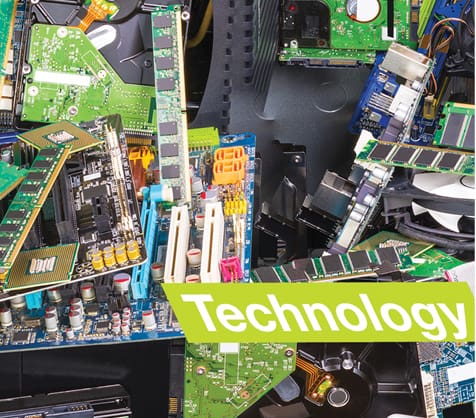 “At end-of-life, there are parts of a server that can be incredibly useful. Getting at them is where the process gets incredibly complex.”

To usher in this green wave, automation companies need to hone some specialized skills in perception to both triage the incoming hardware, and dynamically determine how to process it.

Let’s say a server has 16 memory slots but only half were populated with dual in-line memory modules (DIMMS) enabling fast data transfer, when it shipped. During a service event in the data center, where the mainboard is replaced, one engineer might evenly space the DIMMS so there’s one slot filled, then one slot empty, to maximize the thermal efficiency, while another engineer might add in the eight DIMMS on one side for simplicity. If the DIMMS are populated at random, come the disassembly process, a traditional automation solution might be unable to understand the server’s configuration and detect where the memory DIMMS are located, which will require manual processing of the unit, or generate an exception, resulting in a secondary touch.

An intelligent automation solution with machine vision, perception, and AI capabilities can read the machine, interpret what’s in it and where everything is located, then compare it against the blueprint so engineers have a path forward. It essentially completes an assessment of the unit’s genealogy and provides a bill of material to confirm the presence and location of various components. This then allows the technology to intelligently sort, separate, and remove components and annotate any specific variances that the customer would need to know. With proper IT integrations, you could imagine such a system reconciling, and automatically generating an invoice, or short paying a customer based on missing equipment expected on the system. 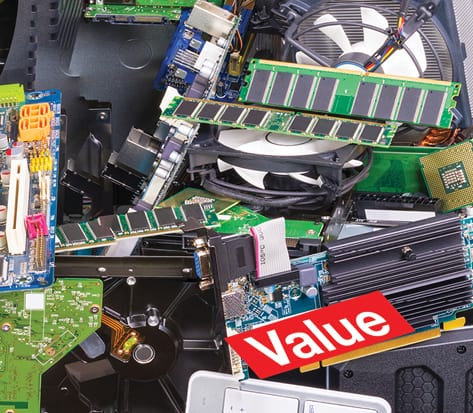 “An intelligent automation solution with machine vision, perception, and AI capabilities can read the machine, interpret what’s in it and where everything is located, then compare it against the blueprint so engineers have a path forward.”

The benefits are numerous: components with sensitive data can have machine driven proof of destruction, systems with usable parts can be rapidly triaged, harvested, and re-purposed, and we can collectively reduce the carbon footprint by minimizing, or even eliminating the need for these hardware products being shipped to other countries. In the carbon-sensitive new economy, there could even be economic incentives associated with responsible handling of these assets.

There’s no gray area when it comes to the benefits of investing in technology that can provide a pathway to immediate and long-term sustainability practices and additional revenue streams. Revamping how companies go about recycling and retiring end-of-life technology is not only the right thing to do for our environment and our communities, but it can have a positive impact on delivering business value as well.  M 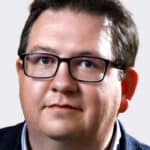