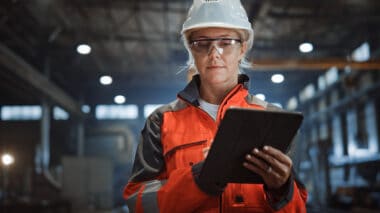 Two statements, from two people deeply immersed in the manufacturing sector, have been playing on loop in my head recently. The first was something said to me by Joe Chen, co-founder of one of our customers, Anduril Industries. He said that his company’s fundamental differentiator (and thus his most important KPI) is being faster to market than everybody else.

The second was an observation I read made by Paul Wellener, Vice Chairman and U.S. Industrial Products & Construction Leader at Deloitte LLP. Wellener, who also serves on the NAM Board of Directors, said, “The challenge is to really make manufacturing attractive to the next generation and to diverse populations.”

It’s hard to argue with either statement. Advances in manufacturing technology are driving dramatic acceleration in development, iteration, and production. And with supply chain problems causing drag on the entire sector, the ability to beat the competition for pace makes you far more likely to win.

Meanwhile it’s been well documented that the older part of the U.S. population is leaving work in droves. More than half of over-55s have quit the U.S. workforce, taking with them decades of knowledge and expertise and leaving a gap which must be filled by younger generations.

But those millennials, who will account for 75% of the workforce by 2025 according to some projections, have a level of choice in employment terms that we haven’t seen for decades. It’s a seller’s market and, with the U.S. manufacturing sector on track to have over two million unfilled jobs by 2030, the urgency behind Paul Wellener’s observation becomes clear.

So it is reasonable to conclude that success in manufacturing as we move forward will be heavily dependent on speed and agility, combined with the ability to attract and retain the best new talent from a pool of workers who are younger, and increasing in diversity of nationality in line with the population as a whole.

Studies suggest that technology has a crucial role to play. According to research from Comptia, 71% of millennials cite the degree to which an organization embraces technology and innovation as an influencing factor in their choice of an employer – a share of the cohort which is increasing each year. They want access to the best technology that will have the greatest impact on their skillsets.

In addition, the survey showed that 61% of millennials like to use their smartphone as part of their working life, compared to just 38% of boomers. Anecdotally, I see the same thing. They want to work as they live, with the same technology – and that means that the ways in which information is accessed, presented, and consumed must change.

Our own research into how product and process documentation is managed within the U.S. manufacturing sector revealed more generational differences in this area. We asked manufacturing professionals from middle management through to executive leadership whether they agreed that text-heavy documentation was challenging because of diverse reading skill levels and first languages. While 66% of those in the 45–54-year-old age group agreed, the number rose to 74% for those aged 35 to 44 and to 81% for those aged 25 to 34.

Where it gets interesting for me is the intersection between that need to beat competitors on time to market and the need to change how information is consumed (and to provide technology that engages and excites the workforce). The reality, of course, is that you are only as fast as your slowest process. And because effective communication of critical product and process information underpins every aspect of success, it has to be on the money.

Our survey suggests this is understood, with 75% of manufacturers reporting that they are actively trying to improve their communication processes, and 73% saying that communication is getting harder for them to manage as they grow. Most telling of all, 73% said they believe poor communication processes are undermining the investments they’ve made in other technology and process initiatives.

These issues are driving uptake of our interactive visual communication and collaboration platform, Canvas Envision because it provides that very step change in how information is delivered and consumed that chimes with the learning styles of the new generation workforce.

The challenges are not going away, but fortunately there is a solution.